A deceptively breezy, carefully constructed story that has a little problem with authority 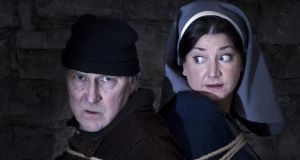 How’s this for getting right to the point: “Your father wants me to take this old film roll and bring it to Henry Barr in Ireland . . . and I’m to trust no one.” So says Martha (Sorcha Fox), a no-nonsense Scottish nun in Nigeria, as she outlines the plot of Donal O’Kelly’s new play for Fishamble. She adds her own incisive critique: “Poppycock!”

After those opening words, though, director Jim Culleton’s enjoyable production can effectively do no wrong. The bright vim of genre formulae allows O’Kelly every narrative contrivance, coincidence and implausibility. Enter Larry, played by O’Kelly, who is entangled in any number of story tropes: a Dublin excon with a heart of gold on One Last Job – a Heist Gone Wrong – resulting in the Hot Pursuit of a Good Thief and a Nun on the Run.

Such is the disarming effect of these little things – effortlessly conveyed by the Fox and O’Kelly’s winning double- act – that the bigger picture comes together with subtle progression. Like O’Kelly’s recent Fionnuala , his concern is the power of the oil industry, here represented by the international henchmen and corrupt head of Scarab Oil. But where Fionnuala made a punching bag out of a Shell Corrib executive, Little Thing, Big Thing concentrates on the political awakening of otherwise oblivious characters. Larry, briefly disguised as a leprechaun, identifies with “the little people”. Martha, briefly disguised in a Pussy Riot T-shirt, espouses people power. And through an artful chain of Irish mythological motifs (further enchanted by Carl Kennedy’s sound effects) their pursuit is one of knowledge.

Both the plot and the politics are suspicious of authority, depicting the church as a haven for loot or forbidden romance, Gardaí as provincial stock characters or hoodwinked and compromised, and the media (in a cameo by The Irish Times ) as haughty and disinterested.

The play is hardly cynical, though, which may be why O’Kelly, given the choice between the sour ending of agit prop, or sending his audience home with the light touch of hope, archly goes for both. At the end of a well-crafted, involving piece, it’s just a little subversive, but that effect can be big enough.

Touring with the Strollers Network until April 9th