Druid carve four Shakespeare plays into an epic of regal succession, and drag the kings down with the people where they belong 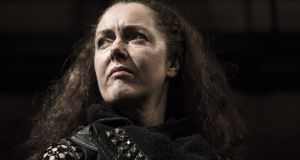 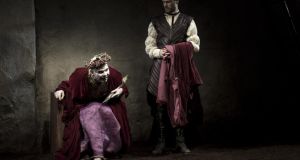 There’s nothing quite as beautiful, or as torturous, as the crown of England we see in Druid’s remarkable staging of Shakespeare’s Henriad, its four plays carved into a lean and propulsive telling by Mark O’Rowe. Francis O’Connor’s creation is emblematic of his industrial and earthy set and, you feel, the entire undertaking: a garland of gilded roses held within a golden crown of thorns. Uneasy lies the head that wears it.

In these plays of usurpation and fractious succession, the whole idea of kingly rule is reordered, from a divine right to a righteous challenge, then waves of rebellion and warfare. A power once conferred from above begins to swell from the ground up. Kings must become human.

That is hardly how Richard II first appears, in the extraordinary form of Marty Rea, who is as epicene, white-painted and bald-headed as a Butoh performer. Rea makes this reckless ruler a creature of unpredictable emotions; a sea of calm, a torrent of rage, a whirl of laughter and tears – the child king who never grew up. Deposed by Derbhle Crotty’s strutting Bolingbroke, Richard’s speeches can be hysterical with self regard (“How can you say to me I am a king?” says Rea, leaving a pained beat between each word, both bold and pitiable), but Rea’s magnificently measured performance also recognises a profound shift in certainty, from God to politics. The earth, with which he so identifies, will be churned up and bloodstained with that upheaval.

It’s an interesting point of contact for director Garry Hynes, whose treatment holds satisfying echoes of Synge in both its earthy aesthetic, fleet progression and more outlandish characterisations.

O’Connor’s costumes, co-designed with Doreen McKenna, are a marvellous conspiracy of woollen cowls and studded leathers, historical references and entertaining anachronisms. Without amplifying the Irish elements of Shakespeare’s text (some are excised, others muted) it becomes a more detached study in power, with sly commentary on how England saw itself and the world.

Crotty’s Henry IV takes the throne with the wariness of a usurper, and, guilty of Richard’s murder, his reign is never at rest: a bloody rash creeps from his neck, from one play to the next, to engulf his body. No monarch is more interesting than Richard, though: Crotty must plod through Henry’s embattled trajectory of worry, defence and decline, but she and Hynes engage in a subversive feminising of the throne - Crotty’s body becoming more exposed with the king’s vulnerable. Shakespeare’s plays tend to parallel the civic and domestic, male and female. Here there is drama in their intermingling.

Like Shakespeare, Druid is most at home among the thieves and rascals, where the dissolute Prince Harry (a worrisome heir and in Aisling O’Sullivan’s performance a gnashing orator) consorts with Rory Nolan’s ribald, comically rotund Falstaff, the tavern hostess Mistress Quickly (John Olohan, crossdressing in the pantomime tradition) and later Aaron Monaghan’s outré blaggard, Pistol. Nolan, white-haired, puffed up and plummy, is an endearing picture of appetite, cowardice and self-creation, and it seems no accident that a company so familiar with Christy Mahon should treat him as kin.

O’Sullivan is compellingly strange – all flat vowels and hooded stares – gradually assuming the mantle of duty while discarding friends and inspiring soldiers. Despite beautiful, brutal battleground choreography from David Bolger, and a rain-soaked Battle of Agincourt, the jingoistic heroism of Henry V is, mercifully, not this production’s music. (Composer Conor Linehan actually incorporates Richard’s words, “Mine eyes are full of tears, I cannot see” as a leitmotif.)

Instead, in O’Rowe’s artful transposition, the saga resolves not in the rhetoric of conquest, but back in the ruder prose of the Eastcheap tavern. Here, the forgotten are mourned, the gruff prepare for France, and we see the most deceptively frivolous figure rest humbly on the throne. Together with the crosses that come to dot a graveyard installation with each interval, or the opportunity to see Druid’s excellent ensemble preparing among the storied remnants of the Hall of the Red Earl, that promotes a rebellious idea within this epic of regal succession: the people, finally, are its heroes.

Until May 30, then tours to nationally