This children’s show creates a concentrated beauty from almost nothing 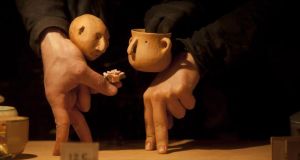 El Patio Teatro bring clay to life in this exquisite non-verbal show for audiences of 6+. Opening on an almost bare stage, the show is sculpted before our eyes, as two black-clad puppeteers emerge from the darkness to create characters from nothing more than their fingers and a lump of featureless clay. How easily they animate an entire world: with a gentle thumb-press they render eyes on a ball of clay, a simple pinch yields a nose, while the movement of digits, fast and slow, bespeaks a whole history of happiness or suffering.

Concieved and performed by Spanish team Julian Saenz-Lopes and Izaskun Fernandez, A Mano is suffused with the sepia-tinged tone of nostalgia for a time gone by. The playful opening gags - where the pair experiment with clay-form characters - eventually give way to a single strand: the story of a crudely carved figurine left behind in the window of a second-hand shop, as finer china figures get chosen by passing customers. Our terracotta hero drifts into fantasy. He takes a family of porcelain under his wing, makes various attempts at escaping his trapped fate, and sets sail in a cup that is oared by a spoon. Finally, he falls in love with a potter’s jug, whom he woos and handles with care until she is snatched from his embrace by a beady-eyed shopper. At the end he is, literally, left on the shelf. You will never look at your household ornaments in the same way again.

A Mano is full of humour and tenderness, and its simple aesthetic belies a concentrated beauty that will reward the attentive spectator. El Patio Teatro have succeeded, like the potter, in creating something really special from almost nothing.

Patrick Freyne: The Late Late Toy Show is coming, there’s no need to be afraid
4

Michael Kiwanuka: ‘If you’re a creative, you don’t try and be that, you just are’
8