Shakespeare, Dante and Bach feature in a programme that’s strong on the classics 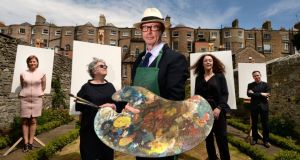 Even documenting this year’s festival will take a classic direction, with participating artists sitting for Irish portraitist Mick O’Dea over the course of its 10 days.

“In a European medieval city we do celebrate classical form, whether through poetry, theatre, music or art,” Downes says. “But it also happens in a contemporary context. What the artists bring to the stages of Kilkenny and what the audience brings to it creates something absolutely in the now.”

This is Downes’ second programme as festival director, which builds on his decision last year to integrate the festival’s previous diverse programme strands, in the hope of creating “a more immersive engagement with the work by the audience. Offering an artistic journey is really important.” So far, the strategy seems to be paying off.

Last year, a pronounced emphasis on Beethoven saw an increased commitment from audiences. Attendees saw a greater number of events each, while visitors to Kilkenny were likely to stay longer.

The festival maintains its hallmark of political and erudite engagement with culture. Irish Times journalist Lara Marlowe will deliver the Hubert Butler Annual Lecture on “Nationalism and Jihad in the 21st Century” while the Bach programme (whose title, Eternal Harmony, is taken from Goethe’s appreciation) will generate accompanying talks from artists such as the Iranian harpsichordist Mahan Esfahani and Chinese-born pianist Zhu Xiao Mei, who learned Bach as a political prisoner during the Cultural Revolution.

There are fewer original works in the programme. Liz Roche Company’s recent Bastard Amber (a co-production between the Abbey and Dublin Dance Festival) does feature, together with two new stagings of short operatic works from OTC, while Martin Hayes continues the collaborative strand of traditional and international music in the Marble Sessions. Otherwise, the festival’s focus on the canon might suggest a marble-bust approach to art in the marble city. “Shakespeare and Bach are good examples of that,” says Downes. “If you believe their work is museum art, that would be a dreadful festival. If you believe they are some of the most astonishingly alive, transcendent experiences you can have in 2015, then that’s the festival I’m trying to present . . . I like to combine the very old and the very new. Should we call it ‘the shock of the old’?”

Just four countries remain on green list: Where do we stand with travel now?