Hamilton: Not your usual hip-hop musical about an American founding father

Hamilton, a show about ‘someone who embodies hip-hop’ – the all-but-forgotten Alexander Hamilton – is tipped to sweep the Tonys on Sunday 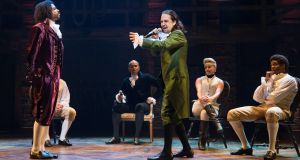 In May 2009 Lin-Manuel Miranda, the 29-year-old son of Puerto Rican immigrants, was invited to perform at the White House. Instead of singing from his Tony award-winning musical In the Heights, he announced: “I’m working on a hip-hop concept album about the life of someone who embodies hip-hop – treasury secretary Alexander Hamilton. ” It was the beginning of a seven-year journey to create Broadway smash hit Hamilton.

The show is sold out until 2018 (it is transferring to the West End) and has been nominated for a record 16 Tony Awards and is expected to sweep the boards; Twitter has renamed the event “The Hamiltonys”. It has won a Grammy and the Pulitzer for drama (rare for a musical).

It’s a tough pitch: a musical fusing hip-hop, r’n’b and traditional musical theatre, dramatising the life of an all-but-forgotten founding father, possibly most famous for having died in a duel. Miranda’s musical Midas touch is using hip-hop as form, not content, and once anyone hears the razor-sharp, intellectually dense and witty lyrics, as Broadway producer Oskar Eustis did that evening in 2009, they understand the phenomenon.

It grips from the opening line: “How does a bastard, orphan, son of a whore and a Scotsman/Dropped in the middle for a forgotten spot in the Caribbean/By Providence, impoverished, in squalor/Grow up to be a hero and a scholar?”

The story of how Miranda took a copy of Ron Chernow’s biography of Hamilton on holiday in 2008 is part of musical theatre folklore. He knew it would make a great musical and that hip-hop made sense because of Hamilton’s humble beginning and his unusual cultural and ethnic background. As he composed his rhymes, the voices he heard were the rappers he listened to growing up in the Latino stronghold of Inwood, Manhattan: Big Pun, The Notorious BIG, and LL Cool J.

Multiracial cast
Chernow, recruited as historical consultant, recalls his shock at the multiracial cast at the first staged reading. Two minutes in, he bought into it completely. Casting young African-Americans as George Washington and Thomas Jefferson is not a gimmick. It is, as the creative team says, America Now telling the story of America Then. Daveed Diggs, who plays both the French general Lafayette and Thomas Jefferson with scene-stealing charm, says that had he seen a black man play Jefferson as a child, it might have changed his life. “A whole lot of things I just never thought were for me would have seemed possible.”

Hamilton premiered at the Public Theatre on February 17th, 2014, and transferred to Broadway in August 2015.

“Lin has tapped into a vision of how America was meant to be,” says Eustis, who likens the composer and lyricist to Shakespeare, and Hamilton to the history plays. That might be a stretch, but Miranda has taken the speech of the people and heightened it into his own rhyming scheme and idiom.

One criticism is that the show can only be seen by wealthy, largely white audiences, but Miranda insisted on making Hamilton accessible, including a programme for low-income New York city public school students. Hamilton is democratised by the cast album. Says Miranda: “I know most people can’t afford a Broadway show; the way you fall in love is the cast album.”

He doesn’t want Hamilton to be “a hip-hop musical”, but the music is an outpouring of Miranda’s knowledge of the hip-hop, r’n’b and Broadway musical back catalogues, with quotes from Tupac and Mobb Deep sharing stage time with Rodgers and Hammerstein, Stephen Sondheim, and Gilbert and Sullivan.

Love letter
This love letter to hip-hop, the musical theatre canon and writing itself brings up serious contemporary concerns without preaching: congressional politics, governmental control, US foreign policy, gun violence, historiography (“who lives, who dies, who tells your story?”). Above all it celebrates immigrants. In the Trump era, a story about an orphaned outcast working his way up to first treasury secretary, told by a multiethnic cast, is stirring.

In one exchange, Lafayette and Hamilton congratulate each other, saying “immigrants; we get the job done”. The response to this line was so vocal that Miranda had to add two bars to the score to allow for the claps and cheers without losing dialogue.

Having worked in theatre for years as a designer I can be slightly jaded, but from the opening bars of the performance, I knew this was the real deal.

Mark Lacamoire has orchestrated the songs so they soar off the stage, and Tommy Kail’s direction is precise and complements Andy Blankenbuehler’s innovative contemporary choreography and its perpetual motion. There are no flashy sets or special effects; the story is told through concise and clever writing, ingenious staging and an astounding cast.

As Chernow puts it, “history is long, messy and complicated; a Broadway show has to be short, coherent and tightly constructed.” Historical liberties have been taken, but the underlying historical truth is not distorted. At its centre is a bitter personal rivalry and a heartbreaking love triangle.

Miranda believes musical theatre is “our greatest art form when it’s done right”. Having laughed, gasped and sobbed along with 1,300 other people who saw the show, I would have to agree.

BYRNE AND RONAN: IRISH TONY HOPEFULS
Gabriel Byrne is nominated for a Tony Award this year for Best Performance by a Leading Actor in a Play for James Tyrone in Long Day’s Journey Into Night at New York’s Roundabout Theatre. He’s up against Jeff Daniels , Frank Langella, Tim Pigott-Smith and Mark Strong.

Also in this year’s nominations (Best Revival of a Play) is The Crucible, featuring Saoirse Ronan’s stage debut.