This isn’t the most serious meditation on gender equality, but it’s definitely one of the most charming 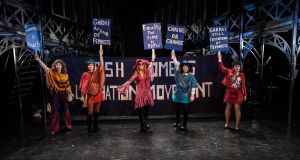 When it comes to women’s history, change is hard-fought and slowly won. Over the last 44 years, there have been countless conversations about reproductive health. In 2015, it’s the eight amendment of the Constitution, but in 1971 there were different challenges. Women had to give up their civil-service jobs upon marriage, and contraception was illegal - but not in Northern Ireland.

Arthur Riordan and Bill Whelan’s musical explores this issue through one act of rebellion: the 1971 contraceptive train spearheaded by the Irish Women’s Liberation Movement. It was a glorious act of Agitprop and is told here through 26 songs and an all-singing cast. The five main characters are composites of the original 47 who took the train to Belfast. This reminds the audience of the diversity of the women involved, but it doesn’t necessarily provide a strong sense of each character. This may be a deliberate means of representing an entire movement, and the five central actors play the parts with vigour.

The Train is a theatrical manifesto, exuberantly played for laughs (it’s very funny), even if it glosses over the tough realities of women’s lives at the time. Like Alison Bechdel’s Fun Home, presenting a serious, issue-driven story as a musical is a risk, but this kinetic production reminds us how far women have come.

Directed with precision by Lynne Parker, it’s a ball of energy, the pace enhanced by a quintet of live musicians. Songs such as Gender Politics and If We All Pull Together reinforce the heart of the story, while Written by a Man showcases Arthur Riordan’s skill of combining history, humour and music.

Bill Whelan’s music feels contemporary rather than retro, and is woven expertly with the script. All of this takes place below Ciarán Bagnall’s imposing iron balcony, which serves as both Connolly station and a pulpit where bishops and Orangemen denounce the women. Perhaps there’s room for a more serious meditation on this subject, but this production is loaded with playfulness and charm.