DTF Review |The Night Alive: A comedy of desperation, in the gritty sanctuary of a Dublin flat

Abandoned by their creator and alone in a random world, the characters in Conor McPherson’s new play have more questions than answers 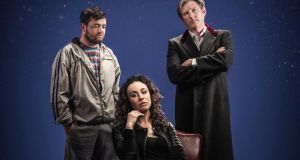 It isn’t a promising refuge, this ground floor flat in Dublin, a high ceilinged haven now drowning in dirt and debris and debt. But sanctuary is wherever you can find it in Conor McPherson’s 2013 play, now receiving its Irish premiere in a handsome co-production between the Dublin Theatre Festival and the Lyric Theatre, directed by the playwright.

This is where Adrian Dunbar’s flighty Tommy lives, an amiable odd-jobs man who has deserted his wife and children and who pays rent to a cantankerous uncle, Maurice (Frank Grimes) – the man upstairs. It’s where his guileless friend and business partner Doc (an excellent Laurence Kinlan, who carefully explains, “It’s short for Brian”) often crashes, just a shiver away from homelessness. And now it’s where Kate Stanley Brennan’s guarded Aimee comes to stay, a prostitute who has been severely beaten by her boyfriend. It is, in short, a haunt for lost souls.

McPherson’s play is a comedy of desperation, where the artless patter of Dunbar’s quick-talking charlatan and Laurence Kinlan’s gormless Doc make them successors to the street philosophers of Sean O’Casey, straining to understand an inaccessible world. Aimee fares less well, despite Stanley Brennan’s assured performance: she is a thinly conceived construction who appears different to each man without ever defining herself.

Oblivion seems precariously close for all of them, whether fiddling the electricity metre to keep warm, snacking from a box of dog biscuits, or discovering – in a scene of otherworldly menace – Aimee’s psychotic boyfriend Kenneth (Ian Lloyd Anderson), a demon of destruction.

As a playwright, McPherson has often brought his naturalistic theatre into close encounter with supernatural forces, leaving his lonely characters adrift somewhere between torment and redemption, God and the devil. Likewise, with little happening on the surface, it’s easy to construe this as a parable, a modern mystery play, where the playwright himself leaves his bewildered creations alone in a turbulent, random world they can’t understand. When a radio broadcast of Marvin Gaye’s What’s Going On? lifts them spontaneously into an endearingly heartfelt dance, Tommy marvels: “That is the question.”

Certain elements in Alyson Cummins’ carefully detailed set hint at answers, where a poster of Gaye, or Finland, or the emulation of stained glass window all anticipate plot points as though shaped by a divine hand. “Look at the way you live,” complains Maurice, an all-seeing figure, at the mess that has been made of creation. But for every act of misfortune here there is another simple act kindness, a sense that both the earth and heaven are only what you make of it.

Marita Conlon-McKenna: ‘I didn’t think I would write another Famine novel’
7