Cheap seats are the future of theatre

Here’s six things we learned at Galway’s arts festivals, including some insights from the Abbey Theatre’s new co-director 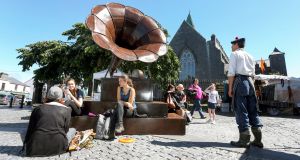 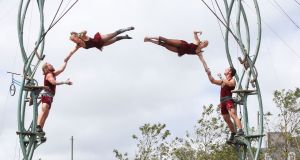 1. Name-checking Galway’s designation as Capital of Culture works every time.

]Elvis Costello is on stage at the Big Top tent on Friday, the night of the announcement. He is in great form, all in black, no hat, dark glasses, with a tight sound onstage and the audience singing along to his glorious songs. It had rained for hours before the gig, and underfoot was a bit soft, if not muddy, but he belts into the gig with Pump it Up. “So, capital of Culture, eh?” he calls from the stage, to enormous cheers. “We’ll do our best.” And he and the Imposters do their best with some of the best songs around, from Oliver’s Army to Alison to Watching the Detectives. “It’s good to be back in Galway. It’s good to be back in Ireland,” he says to large cheers. “It’s good to be back in Europe” gets the biggest cheer of all. A comment on Brexit, or on that day’s win for the city? Notwithstanding the rain, the atrocity in Nice, and concern about Galway’s inadequate infrastructure, the City of Culture delight among citizens, people out and about and at shows, is palpable and infectious.

2. You can do a lot with a few flowers in a church

And with feathers, leaves, crystal balls and some video art. Donal Dineen’s show at St Nicholas’s church, The Pipes, The Pipes, features the majesty of three uileann pipes together filling the chapel, with a backdrop of Dineen’s video imagery, created with visual art director Lionel Palun (a “magician of light” Dineen calls him). Taking video footage of the band playing live, and leaves, feathers or other images, he plays with the shapes and colours, increasingly distorting and mixing and changing, to create a sometimes mesmeric backdrop that seems like a painting moving to the rhythm of the powerful, evocative music. Dineen on stage afterwards says Galway is a city of culture every year (cue the large cheer). He mentions those involved in the unusual presentation in the church, “and God was on our side; it obviously helps”.

3. Ballinrobe has a gay community

Rory O’Neill aka Pantibliss is on a panel discussing All Change? Ireland’s identity 2016, as part of the First Thought Talks series. Chaired by Arts Council director Orlaith MacBride, the panel also includes asylum seeker Blessings Moyo and Mary Corcoran of Maynooth University. O’Neill describes being in a bar after the Gay Pride parade, and how a group of seven people in their 20s from his home village in Mayo came over to talk to him. “I realised: Ballinrobe has a gay community. It was stunning to me.”

Blessings Moyo speaks eloquently about the children of asylum seekers being stateless, and not being accepted as Irish, despite living their lives here. Aside from the injustice and negative personal impact, she points out dangers down the line from exclusion. “Children are growing up, realising they are not accepted as an Irish child, and they don’t have a sense of belonging. They become angry, and what happens – they retaliate . . . Ireland is not immune to what is happening in other countries.”

Mary Corcoran points out how socially segregated Dublin is: “There are disadvantaged areas and there are salubrious neighbourhoods.” In segregated schools stereotypes develop, but integeration changes attitudes. They all agree that visibility is what changes Ireland: the visibility of gay people, of women who have had abortions, of immigrants. And what stops change is fear.

Humanity Dick has to move from his original 18th century theatre on Kirwan’s Lane to above the Quays pub, because of ticket demand. Galwegian “Humanity Dick” Martin – described as a celebrity duellist, cuckolded husband, father of animal rights and rolling financial disaster – is the subject of a solo show (subtitled A Tale of Beasts and Bullets) written and performed by Sean Leonard. Part of the growing and thriving Fringe festival in Galway, it was originally upstairs in Busker Brownes bar (the approximate location where Martin set up the first theatre in Galway). but had to move to a larger venue. We learn that Martin, a landowner whose estate included all of Connemara, was responsible for Martin’s Law, the first animal cruelty bill, in 1822, which he enforced himself on the streets of London (galwayfringe.ie).

5. The future of theatre is cheap seats

In a panel discussion about whether theatre can define a nation, Michael Billington quotes Peter Brook’s wisdom about pricing. That wisdom also prevails with the other panellists, Abbey theatre co-director designate Neil Murray, and Cathy Leeney of UCD drama, with the actor Cathy Belton chairing.

They discuss how theatre can reflect a nation, especially in the context of collapsing certainties. “Speaking for a collapsing nation,” says Guardian theatre critic Billington, theatre inescapably reflects its context. “At this moment people are depressed and despairing and frustrated and angry,” and he looks forward to how this will play out in theatre. Welshman Murray, formerly of the National Theatre of Scotland (NTS) , is interested too to see the response: “Someone will make verbatim theatre about what’s happened in the past four weeks.”

Billington is feeling fatalistic: the UK is becoming a banana republic – only we have no bananas, and we’re not a republic, he comments. In response, post Brexit, he says, “theatre has to be consciously and actively European. And it has to be consciously and actively oppositional” to the negative forces in society. It also needs to acknowledge diversity and break gender boundaries. “It could be an opportunity. Who knows, as the nation collapses, theatre thrives?”

Murray gives some interesting hints about the direction that the Abbey may take in the future, talking about “national” as a geographic word, and how “not everything has to happen in theatres, with interval drinks”. He talks about the NTS project Home which involved 10 simultaneous productions all over Scotland - which is one way to make a theatre national.

The cheap-seats chat is about how to broaden the audience for theatre. As well as pricing, “star-casting” works, says Billington, but most of all, putting on plays that relate to the experience of younger people. Murray agrees: “Put their world on stage and they will come.” This is “a massive challenge for the Abbey. The main stage doesn’t speak to a young audience. It still holds the canon dear.” He cites the Abbey’s three separate productions of The Plough and the Stars in recent years; though “that’s a fact, not a criticism”.

Billington says filmed versions of top stage productions, such as NT Live, is “the most revolutionary thing that has happened in my lifetime in theatre. Everything is available to anyone who can afford a cinema ticket.” Murray is more cautious, stressing that theatre is a live event. Murray is positive about ensembles of actors, too. Some more hints of the future there.

6. The best view of Galway city? From pram at the top of a trapeze on Eyre Square

French spectacle/circus company Les P’Tits Bras (don’t snigger) perform in front of a capacity crowd outdoors for more than 45 minutes of high-end antics on a gorgeous art nouveau-style trapeze. The act involves performers throwing each other from one side of the trapeze structure to the other, with a recurring motif of a baby in a pram (who also gets thrown). Five performers, huge skill, comedy and silliness in a 19th-century style circus show. What’s not to love?