Cascando review: a subversion of immersive theatre that appeals to the ego

Pan Pan’s production sees the audience listen on headphones to a new recording of Beckett’s play, while moving in slow procession through a labyrinth 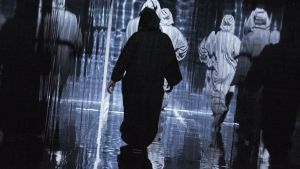 Asked before the show to remove your shoes and don an enveloping black jubba – a hooded garment that conceals you head to toe, like a medieval monk – many audience members do what any sane person might: they take a selfie.

That may be an unforeseen response to Pan Pan’s staging of Cascando, the experimental company’s latest staging of a Samuel Beckett radio play, but it seems curiously appropriate.

The novelty of this invitation, in which we listen to a new recording of Beckett’s 1963 play on individual headphones, while moving in slow procession through a black labyrinthine space, makes it seem all about us. To some extent, Beckett’s fracturing play does appeal to your ego – it has a hall-of-mirrors structure that could only take place in your head.

But it also seems to depict a mind in disintegration. The first voice we hear (Daniel Reardon, playing a figure known in the text as Opener) commands another (Andrew Bennett, ragged and measured, plays Voice) who in turn attempts to tell an elliptical story about a man, Woburn, who makes a faltering journey.

Both the story and the journey frequently lose their way, budged by swelling or subsiding passages of music in Jimmy Eadie’s absorbing compositions: “if you could finish it… you could rest…” urges the Voice. A cascando represents the dying of music. The self is dissolving.

There is an unsettling correspondence in the journey of the audience, which begins as a laugh, shuffles into darkest uncertainty, and carries the sensation of making a few illuminating discoveries during what turns out to be a ceaseless chore. (That’s also a grim, but persuasively Beckettian, summary of life.)

Aedín Cosgrove’s labyrinthine construction, curling around corridors of reflective black surfaces, give us ghostly reflections, where her pockets of light reveal shapes briefly, then wane into utter darkness. Look ahead or behind you and you’ll see an indistinguishable column of hooded figures, and the journey to the centre of the set feels more and more penitential. Not for the first time in Beckett, the words seem like a mordant joke on the audience: “we’re there . . . nearly . . . just a few more”.

You have to laugh. In the centre of the maze, where a glass partition lets us see ourselves – as through a mirror dimly – my audience turned around the panels in an endless circle, like the cowled druids in Beckett’s television play Quad, or the way ants do when they have become lost. You couldn’t say that this focuses your attention entirely on the play, but it does achieve a near perfect equivalent with it. It’s how Beckett, the master manipulator of form, would have subverted immersive theatre.

And if Pan Pan’s third response to his radio work doesn’t have the sensory embellishments of All That Fall or the eerie mortal chill of Embers, its staggering promenade certainly follow in his footsteps.