Arthur Miller voiced the hopes and fears of ordinary Americans

The celebrated playwright was born 100 years ago today in Harlem, New York 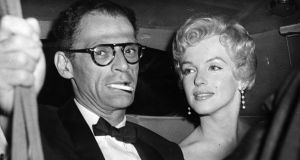 Anyone fortunate enough to have met dramatist Arthur Miller, who was born 100 years ago today in Harlem, New York, invariably agrees he was a warm, regular guy: no airs and graces, possessed of a sense of humour, a handshake that could inspire confidence and a profound understanding of the problems facing his country, a diverse multicultural society at war with itself.

In common with Nobel Literature laureate Saul Bellow, who, born in June 1915, was a few months older and died some six weeks after him in 2005, Miller was the son of immigrants.

Whereas being Jewish was central to Bellow’s work, which took as its prevailing theme the Jew attempting to assimilate in the United States, Jewishness did not dominate Miller’s art – although he was very Jewish in speech and manner despite having lived in Connecticut for more than 50 years.

Brave and candid, he had honour, and while for many observers the first thing that came to mind when discussing Miller was that he had been married to Marilyn Monroe, more would recall it was Miller who stood firm when called to appear before the House Un-American Activities Committee.

Whereas director Elia Kazan named names, Miller refused to squeal on his communist friends, fellow artists and writers. He later denounced US involvement in Vietnam.

Miller was a majestic playwright, a great American and a man who, when I asked him how he felt about his father, replied: “He was uneducated, you know, we didn’t have an intellectual relationship. I was proud of him, he was a kind man. I loved him.”

Miller was then 82 and when speaking of his mother referred to her death being “too soon”.

Through the experiences of his characters he explored the pathos of the collapse of the American Dream.

He looked beyond the romance and concentrated on the reality of defeated idealism.

In his lifetime he was a giant presence; he is and will remain the defining voice of American literature.

At any given moment his major plays are as likely to be in production around the world as are those of Shakespeare and Beckett.

It is his voice: Miller knew how ordinary Americans spoke; he articulated their hopes, fears and regrets. He was a realist in the tradition of Ibsen. If there is one quality in Miller’s plays, and there are many, it is the abiding compassion.

Rejecting the mystique of Scott Fitzgerald’s self-inventing Jay Gatsby, Miller looked to Willy Loman, the central character of Death of a Salesman, and presented him not as a tragic hero but as an ordinary man, a victim of all-too real delusions and a pathetic, fragile ego.

Loman is Everyman and his son, Biff, the golden youth, college-bound and expected to soar, turns out to be a liar.

The play was written in six weeks, it won the Pulitzer Prize and it consolidated the impact Miller had made, two years earlier, in 1947, with All My Sons. Miller’s strength was being able to portray the weakness of strong men.

As he got older, he confronted deafness, which he dismissed as an irritant. “It makes talking on the phone kinda messy.”

Theatre director Joe Dowling has a good story about Miller on being asked to explain his longevity, pausing to consider, before replying, “I eat a lot of hot dogs.”

Miller, tall and rangy, told me he was double-jointed. I said I was too. That made him peer; he said he would show me a trick with his thumb. I did it better and Miller shook his head, saying: “Maybe I’ve forgotten how to do it.”

The plays speak because Miller believed in speech-as-spoken dialogue. It seems almost symbolic that an earlier pillar of US theatre, Eugene O’Neill (1888-1953) died the year Miller completed The Crucible.

It is great theatre; it is also eloquent polemic. Based on the Salem witch trials, it is about the corruption of a society and the fear imposed by the powerful.

Arthur Miller was an artist and a survivor. In Timebends (1987) he wrote a memoir which is candid, relentless, conversational and emphatic.

It is his story and also that of the US, with his life and his work mirrored and reflected. He was loved, and also liked, a very special teller of truths.