Amy Conroy: ‘I didn’t know how to be the girl I was supposed to be’

Conroy’s new play is about the journey made by transgender people, but more than anything, says the writer, it’s about families 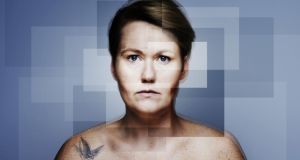 Amy Conroy: ‘There is this fixed idea of what it means to be a man or a woman, and there is very little fluidity, and I don’t believe that is how we really are’

‘Ah, my boy hair,” Amy Conroy says as she catches sight of herself in one of many mirrors in a Dublin hotel bar. “I forgot about the boy hair.”

Conroy examines her profile and pulls a few poses to complement her masculine bonce: she expands her frame to fill the bar stool, leans forward with enough eagerness to be aggressive and holds my gaze a little bit too long.

“I got it done yesterday,” she says, a last-minute touch in her transformation into Mark (formerly Laura) for her new show, Luck Just Kissed You Hello, which premieres next week at the Galway International Arts Festival.

The play, which focuses on a transgender character, is about much more than sexuality, she says. “I wanted to write about the physical and emotional journeys of people who change so dramatically, but also about the experience of those around them. So if you were to ask me to say what the show is about, I would say it is about families more than anything else.”

The idea for Luck came from an unlikely source. Conroy was at the Abbey watching Richard Dormer’s 2013 play Drum Belly (a conventional work about Irish gangsters in New York). She was struck by the way the audience reacted to the male characters.

“What I was interested in was the balls-out masculinity of it,” she says. “There was no apology for the violence, and I thought that was kind of liberating. [I’m interested] in the boxed-in sense of masculinity and femininity that defines everything we do from such a young age. There is this fixed idea of what it means to be a man or a woman, and there is very little fluidity, and I don’t believe that is how we really are.”

From a personal place

Conroy has “no gender identity questions myself”, but says that the play comes from a “very personal place”. Growing up in Cahersiveen, Co Kerry, “I always felt there was something different about me. I didn’t like pink. I wanted to be a boy. Or rather, I didn’t know how to be the girl I was supposed to be. Then, when I realised I was gay, I thought, Oh, that’s why I have always felt so different from what people thought I should be.”

This sense of displacement led Conroy to the theatre. “I just wanted to get out and get away and there was nowhere to go, so I would disappear into my head,” she says, “That led me to films and books. That was where people could shed themselves and try something else, or play at being something else at least.”

She moved to Dublin to study performance, and it wasn’t until she discovered “the queer scene” that she became comfortable with herself. “It was this idea of an in-between space . . . where you didn’t have to identify with one thing or another, one gender or another. You could play anything you wanted.”

As a professional actor, however, Conroy found herself typecast as “the fat best friend”. When she discovered the work of Barabbas Theatre, she saw the potential for embracing the fluidity on stage that she was interested in. Working with the company gave her a grounding in structured improvisation that has deeply informed her approach to writing.

Not that she ever thought she would create her own work. “I remember Raymond Keane [of Barabbas] asking me would I write, and saying ‘absolutely no way’.”

But then, of course, she did. I Heart Alice Heart I premiered at the Dublin Fringe Festival in 2010. Using a wickedly witty documentary style, it detailed the relationship between two elderly women, both named Alice, who fall in love over groceries at their local supermarket. The show was an unlikely hit, and was performed at the Dublin Theatre Festival the following year. Since then it has travelled across the globe, from Iceland to Tasmania, including a residency at the Peacock.

Not bad for a show about a pair of older lesbians. “It was important to me that it wasn’t just a gay show,” she says. “It was a show about love, about humanity.”

Conroy starred in that show, and in all her work since, playing a disaffected teen in Eternal Rising of the Sun (2011) and a teacher under pressure in Break (2013). She says she never really set out to showcase her acting talents; it was more important that “I put my money where my mouth is. If it all goes wrong, I should be there to take it. The responsibility should fall on my head.”

Conroy especially feels that onus with her new play, in which she takes on the voices of a largely invisible community.

“I think it’s important to say that I don’t think I can speak on behalf of the trans community,” she insists, but their story probes deep into the cultural ideas of “what it is to be a man, what it is to be a woman: that boxed in sense of identity” that pervades our preconceptions of people, “even at a glance”.

With that, Conroy heads back on to the street with her “boy hair” to test the preconceptions of passers-by. Then it’s off to Galway for the premiere of Luck, and judgment of a different kind.