Aidan Gillen: ‘My ambition is to not have to chase money’

HBO has been the actor’s main employer for years, which enables him to do smaller projects, such as a reading of Joyce’s story The Dead in Dublin this week 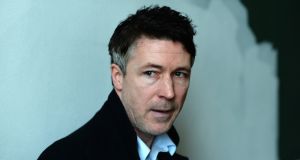 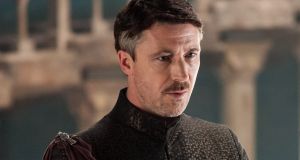 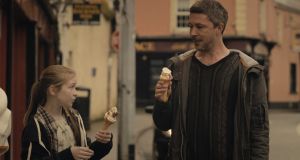 We are in the Cobalt Cafe on North Great George’s Street at a window table on which there is a white paper napkin with the word “reserved” scrawled in blue biro. Aidan Gillen suggested we meet here. He thought that, with its tall Georgian buildings, it might be an appropriate setting to discuss The Dead, which Gillen will be reading in Smock Alley this week, with Fergal Murray providing musical accompaniment.

“It is not a theatrical production, [it is] a reading with music which has been composed, and is being played on the stage at the same time, so it’s almost like a scoring, or an underscoring. Our aim would be to give you the text clearly and with some feeling.”

He first heard The Dead read aloud in a room 50m up the road, in the Dublin Shakespeare Society basement. Gerard Stembridge was one of the performers. “I did some of my first plays in there. It’s not there any more.”

He has performed this piece at the Globe in London. “It will be exciting to do it in front of an Irish audience. You have to give it life but you can’t overdo it, otherwise it can become overbearing. It’s got a lot of life in the words already.”

The Dead formed part of a series called A Winter’s Tale, described to Gillen as a “Jackanory for adults”. Works by Chekhov, Daphne du Maurier and F Scott Fitzgerald were also performed by other actors.

Dominic Dromgoole, the artistic director of the Globe, suggested that they have a musical accompaniment. “I had seen Fergal’s collaboration on a production of the Rape of Lucretia – where it was two people on the stage, Fergal and Camille O’Sullivan – so he seemed to be the guy to ask.” He asked Conor McPherson to do the direction.

Gillen sees it as a more accessible piece from Joyce. “People have certain conceptions of what Joyce is – but it’s an easy story to read, an easy story to listen to, and is regarded by many as the finest short story ever written. It’s very cleverly engineered.”

After London, “we were sitting around in Conor’s studio in his house in Dún Laoghaire thinking, We’d be crazy not to try and put this on in Dublin around the Feast of the Epiphany. You know, it’s set on the sixth of January. It would be very simple to get a room in Dublin. All we need is a piano, and some people to listen to it.” They approached Willie White of the Dublin Theatre Festival for help.

Gillen’s career seems to mirror that old adage of many actors: one for me, one for the studio. He does big productions such as Game of Thrones to finance smaller projects that he works on for next to nothing. When I ask him about this, he is quiet. “I was trying to work out which end of the scale [The Dead] is. Is it the big end of the scale? I’m just trying to do interesting . . . stuff that has appeal and comes my way.”

He tends towards films with tight budgets, such as Mark Noonan’s You’re Ugly Too earlier this year, and several films with English director Jamie Thraves. “I do think it’s important to work at that level and at that end of the scale.” He believes the lack of money gives directors more artistic freedom and he says that Game of Thrones allows him the luxury of doing that work.

“I’m as keen to be sitting here on North Great George’s Street than anywhere else in the world. I hope I will continue to work outside Ireland, in England and in America, but I’m not trying to get away. I’m not trying to make it bigger. I’ve had to work as much as I could while my children, who are now teenagers, were going through school, but my ambition would always have been to downscale once that’s done, and to not have to chase money.”

He was signed up for six seasons of Game of Thrones. “I was, yeah.” It’s longer now, is it? He laughs.

“All that. Blah blah blah. I’ve just finished working on the sixth season, yeah,” suggesting he might not be culled any time soon. He has also just finished work on a Guy Ritchie film, Knights of the Roundtable: King Arthur, scheduled for release in July. “That could be an ongoing thing.”

He tends to be cast as a villainous character. “I do enjoy playing those roles. Maybe they’re too easy and there’s been too many of them. I’ve been trying not to do so many. He had initially been playing “very green characters. I think I was so surprised the first time I got cast as a villain . . . I haven’t ever killed anyone,” he deadpans. “Apart from out of mercy.”

Much has been made of Gillen’s shyness: there are long pauses in conversation, which seem to be born out of caution, a desire to give a better answer than the one he is giving. He occasionally allows himself to slide into gentle anecdotes, such as the time he sent a video tape to his cousin in San Francisco after the release of Queer as Folk: “I don’t know what he did with it but all of a sudden there were tapes of it all over San Francisco – unofficial.” And when he met the actor who played the same role as him in the US version: “I brought him to Fibber Magees. He was wearing leather top to toe. He was a nice fella.”

He prefers to disappear into the skin of a character, villainous or otherwise. Most actors he knows are “shy, inarticulate people. You get to practise at not being shy and having other people articulate. It’s great.”

I remind him of a previous quote of his about feeling naked coming out at the end of a play to take your applause. “I got into trouble with my mother for that one. Listen, c’mere, y’know what,” he says, leaning in, suddenly lighter, “and it’s not bad advice either. I think that’s the time when you’re supposed to acknowledge the audience’s participation as well. Thank you for being here and lending us your time and for buying a ticket, and we’ve all shared in this experience. So you don’t want someone glowering at you. It’s just that you’ve been pretending for a couple of hours and then you’re not and it can be a bit embarrassing.”

He left for London at 18 in the hope of working on one of the cutting-edge dramas that were being done so well in the UK and were virtually nonexistent here. What does he think of the state of Irish television these days? “Love/Hate was a really good drama. Stuart Carolan did a really good job. I was proud of Charlie and I’m interested to see what Rebellion is going to be like. I do think that we’re entering a new time. A new chapter has been opened in Irish TV.”

He also sees a shift in Irish cinema. “Film-making in Ireland has become less theatrical in the meantime and more cinematic. They talk less in Irish films now and it’s more about the image. If you look at Lenny Abrahamson’s films, he’s arguably at the forefront of the next generation of Irish film-makers and I’m sure Room is gonna be his biggest film. There’s more space in his films.”

In terms of his career, there is no big plan, he says. He tends to think a few weeks ahead. “The Knights of the Roundtable thing, contractually I might be doing more of that. Game of Thrones is an ongoing thing which I may or may not be in.”

Then he leans in to the voice recorder dramatically: “And of course, always away in the future is that dream of making jam, and living with the bees on the Beara peninsula.” He laughs. “It’s just what everyone says. It seems to be common idyllic utopian vision: bees, honey, jam, west of Ireland, or is it just in my own head?”

Then he reins himself in again. “I don’t think anyone anticipated what was going to happen with television and where’s it gonna go, but it’s been my main employment. My main employer has been HBO in the last 10 years, and I feel very fortunate to have found my way there.

“It’s great writing, all of it. But it’s not James Joyce, you know,” he says.

Dermot Bannon: ‘I used to win Lego competitions ... but I lied about my age’
7