A comic treatment for the bard 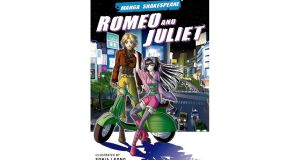 Shakespeare’s greatest dramas have been adapted for a Manga reading audience. So are they a comedy of errors or a literary triumph? SARA KEATINGfinds out

‘The year is 2017. Global climate change has devastated the Earth. This is now a cyberworld in constant dread of war. The state of Denmark has grown prosperous and defended itself successfully against neighbouring states. But could it be that its greatest threat comes not from without, but from within the state itself?”

The voice-over script for a new science-fiction film, right? But doesn’t that “state of Denmark” bit sound familiar? Of course it does. This is the scene-setting introduction to Manga Shakespeare’s futuristic adaptation of Hamlet, just one of its 14 comic-book approaches to the bard. Modern technologies meet ancient tradition in a contemporary Athens-set A Midsummer Night’s Dream. Samurai warriors reclaim a future post-nuclear world of mutants in the Scottish play, Macbeth.

King Learmeets Last of the Mohicanson the American frontier. Depending on your taste, this is a Manga-style mutilation of classical literature, or an exciting new manifestation of the eternal popularity of Shakespeare.

First published by Self Made Hero in 2007, Manga Shakespeare merely marks one of the millions of re-imaginings of Shakespeare throughout the centuries, on stage, film, television, and in a variety of other popular cultural forms. From Shakespeare’s shrew being tamed in John Fletcher’s Elizabethan drama The Woman’s Prizeto Leonard Bernstein’s musical West Side Storyto Baz Luhrman’s postmodern punk Romeo+Juliet, the plays have proved malleable to multiple ends: political in the case of Heiner Müller’s Hamletmachine, whimsical in the case of Gil Junger’s 10 Things I Hate About You, absurd in the case of Theatre of Blood, in which Vincent Price plays an actor who takes poetic revenge on the critics who denied him recognition and kills them using methods inspired by Shakespeare’s plays. An anticipated re-imagining for 2010 is Kill Shakespeare, a new comic-book series that sees Shakespeare himself fight a battle of super-hero proportions, as “Hamlet must rally the bard’s greatest heroes to battle the bard’s most frightening villains”, who have turned on their very creator. (You can view a teaser trailer on www.killshakespeare.com.)

MANGA SHAKESPEARE is particularly interesting, because it pits its graphic interests alongside educational aims. Its editorial team was led by leading Shakespeare scholar Richard Appignanesi, and its illustrators were advised by teachers and other education specialists in the task of “making serious works of literature more accessible”. The target audience is teenagers who are being introduced to Shakespeare’s work for the first time, but the books are designed as a complement to their reading, rather than as a substitute for the texts themselves. Because Japanese Manga draws its core audience from youth culture, and is also often used as an educational resource in Japan, the adaptation of form and the complementary visual style has precedents.

The distinctive visual style of Japanese Manga animation evolved in the post-second World War era. It uses traditional Japanese drawing techniques and draws on Western influence, specifically the Disney and comic-book culture of 1950s America, to create an idiosyncratic, culturally-specific style. In the early 21st century, however, Manga has crossed all cultural boundaries, and has become embedded in contemporary popular culture, specifically the urban arts. Manga Shakespeare thus provides a stimulating resonance for students with their own lives and interests, in much the same way that hip-hop/slam poetry has been used to reinvigorate interest in poetry in schools.

In Romeo and Juliet, for example, Romeo is the rock-idol son of a mafia boss in present-day Tokyo, while in The Tempest, a global energy crisis sees Prospero washed up on the island. Crucially, however, Shakespearean verse remains verbatim, albeit in abridged form. Spoken by men with tattooed torsos and scantily clad heroines, Elizabethan poetry seems more like a living language than an archaic one, an idiosyncratic sexy slang.

Manga is traditionally rendered in black and white form, but the first few pages of Manga Shakespeare books (mangashakespeare.com) are vivid in neons; the flash of big-city lights, or futuristic visions, setting the colourful tone for the action that will follow. Characters are introduced formally, with a carefully-chosen key quote. The detailed costumes, gestures and symbolic iconography provide a snap-shot of traits and themes to come. In Romeo and Juliet, for example, the self-absorption and vanity of the teenage star-crossed lovers is rendered with dark-inked downcast eyes. Meanwhile, stage directions are framed in text-boxes and dialogue in bubbles throughout the pages. However, rather than reducing the play to a plot summary, Manga Shakespeare encourages you to study its form; the startling clarity of the Manga drawings focuses attention on how emotion can be embodied in images, be they literary or visual.

Manga is especially artful in capturing facial expression, while the visual rendering of the bloodshed of some of Shakespeare’s tragedies allows a concrete understanding of metaphorical violence as well as its reality.

For the most part, Manga Shakespeare has received glowing praise from teachers and graphic artists, as both an introduction to Shakespeare and to contemporary art forms, which students are given an opportunity to try themselves in workshops. They take specific scenes from the plays and condense them into comic-strip form, which forces them to pay attention to meaning as it is embodied in Shakespeare’s language.

Anything that makes classical literature more accessible and more interesting for young teenagers, teachers say, will ultimately lead them back to the original text. It is, perhaps, a mode of instruction that Shakespeare himself would approve of: “Those that do teach young babes,” he writes in Othello, “Do it with gentle means and easy tasks.”

Celebrating a society of outcasts: the homeless prostitutes known as Curragh wrens
7