Short and very sharp: the majesty of Alice Munro

Munro’s genius is in the short story, and that is what makes her winning the Nobel Prize for Literature so exciting 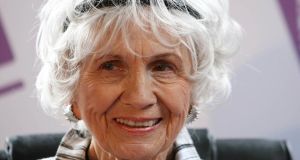 Alice Munro: many writers refer to her as the person who made them want to write. Above: Munro at Trinity College Dublin. Photograph: Peter Morrison/AP Photo

Readers and writers throughout the world will celebrate the awarding of this year’s Nobel Prize for Literature to the revered Canadian storyteller Alice Munro.

This coolly astute observer of the ordinary is the only living practitioner of the short story to be consistently mentioned in the same breath as William Trevor. By honouring Munro yesterday, three months to the day past her 82nd birthday, the Nobel committee has acknowledged in this, the award’s 110th year, that great stories are created by a nuanced sentence, a sudden realisation, a life-changing wrong choice; they are made in the description of a knowing glance, the angle of a character’s shoulders as they walk away, in the slow anger that destroys a love and shapes memory. Character, not plot, drives her art, which explores life as lived.

Many writers, not only Canadians, refer to her as the person who made them most want to write. Munro discovered early in her career that the best fiction is shaped by truth. She has watched, listened and wondered. Just as she looked to Chekhov and the Joyce of Dubliners, writers all over the world defer to her. As anyone who has ever interviewed authors will agree, Alice Munro, along with Trevor, is most frequently mentioned by writers acknowledging their influences.

Munro as a literary phenomenon is best compared with another inspired miniaturist of a far earlier epoch, Jane Austen. Munro’s sense of irony is invariably directed at herself more than at her characters. She has always regarded herself as an anachronism: an old-style writer, writing about a rural world she once knew, which has been transformed. Except that, although society has changed, human nature hasn’t, and this is why Munro’s understanding of life is so compelling.

Architectural approach
Her traditional feel for narrative gradually evolves to reveal an accumulation of telling detail. Slowly and carefully, she builds a story in an almost architectural way, rather like those of Henry James. A life emerges as the layers of protective coating are peeled away.

Most of her fiction is based in rural and semi-rural southwestern Ontario, the landscape of her childhood. Never as political or as intellectually assertive as Margaret Atwood, Munro’s tone is closer to that of other Canadian writers such as Margaret Laurence and Mavis Gallant.

By the time Munro arrived at the University of Ontario, she was already a writer, having begun consciously noting down observations as a 12-year-old. At 15, she had decided she was going to write the Great Novel. Interestingly for one of the world’s finest writers, she has written only one novel, Lives of Girls and Women, which was published in 1972, when she was 41.

Munro’s genius is in the short story, and that is what makes this honour so exciting. She is the second Canadian-born writer to win. Saul Bellow won in 1976, although admittedly his family moved from Montreal to Chicago when he was nine, and he became one of the major voices in US fiction. It has been Munro who has really established Canada as a place, as well as a Canadian voice, in world literature.

Her win is also a tribute to the art of the short story. She is only the 13th woman to be so honoured. She won the 2009 Man Booker International Prize, and remains the only writer to have secured a Booker shortlisting with a collection of short stories, The Beggar Maid, in 1980. Her first collection, Dance of the Happy Shades, was published in 1968, that year of revolution, and it is true that Munro has never attempted the radical. She has chosen a far more difficult path: the ordinary. Nor did she become involved in literary feminism.

Growing reputation
Many first discovered her through the New Yorker. Her reputation built steadily with three further collections, including Something I’ve Been Meaning to Tell You and The Moons of Jupiter, as well as her sole novel.

By the time her fifth collection, The Progress of Love, was published in 1986, she had attracted an international following. It was overwhelmingly one of the major books of that year. The same happened four years later with the publication of Friend of My Youth, which includes several of her finest stories, such as the title story and Hold Me Fast, Don’t Let Me Pass.

In 1994, Munro suggested that she was becoming more drawn to history, and some of the stories in Open Secrets ranged from the 1850s, through to the two World Wars.

There is also the fact that Munro has explored through the background of her characters the close and often painful relationship between Canada and Britain, particularly Scotland. She understands the conflicts that underlie these bonds and the cultural tensions that can tear characters who are caught between two countries. This theme would resurface in Munro’s quasi-autobiographical The View from Castle Rock (2006), a book that divided her readers but charmed others who had never read her before.

Four years after Open Secrets, Munro showed that she still had a great deal to say about the lives of women, in The Love of a Good Woman. Her 2001 collection Hateship, Friendship, Courtship, Loveship, Marriage is further proof that it is possible for a short story to say far more than a novel, a fact the Nobel committee noted when remarking on Munro’s ability to say more in 20 pages than other writers convey in entire books. Too Much Happiness was published in 2009, while Dear Life (2012) is not only one of her finest collections, it also reveals inspired traces of controlled rage. (She also announced she was retiring from writing after its publication.)

Determinedly non-intellectual
In appearance she is small, delicate and very feminine. Whereas Atwood, quick and funny, establishes an immediate rapport, the calm, friendly Munro is somewhat detached and determinedly non-intellectual. She is practical and without pretension. One becomes gradually aware of a shrewd presence that has learned from life and experience. She misses very little and is impressive without being intimidating. She is a reader and a thinker; she is also an artist, a philosopher who has always grasped the essential distinction between the merely knowing and the wise – Munro is wise.

To honour her is to honour literature. A writer, not an activist, has been honoured, and why not Alice Munro? Equally, why not William Trevor? He is now 85 and his claims to this great honour are as strong.

Alice Munro has won for art, not politics, unless of course one conceded that her subject is the politics of life, which explains why her stories live and will continue to do so.