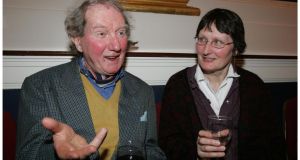 Desmond O’Grady and Margaret Hayes from Limerick at the launch of the Beckett Centenary Festival at Dublin Castle. Photograph: Alan Betson/The Irish Times

President Michael D Higgins has led tributes to Desmond O’Grady, the Limerick-born poet and member of Aosdána, who has died at the age of 78.

Describing him as one of Ireland’s best-known poets, he said O’Grady was deeply committed to his work which had rightly received international attention.

“From wherever he was writing, be it Cairo or Kinsale, his work invoked a sense of what was Irish in both heritage and contemporary life,” Mr Higgins said.

“He established a fine reputation as a translator of literary works from various languages into English. He leaves a fine collection of work, reflecting both his migrant experience and his affection for his homeland, that will be studied and cherished by future generations.”

Mr Higgins said people who knew him as a friend would never forget “his rich sense of humour and his deep commitment to friendships which he valued and enriched”.

O’Grady was born in Limerick in August 1935. After finishing boarding school in Roscrea to moved to Paris in the 1950s and worked in the Shakespeare and Company bookshop before he began teaching in the city. He also taught and wrote in Rome and America.

He met Federico Fellini during his time in Italy and played the role of an Irish poet in Fellini’s film La Dolce Vita.

He was a teaching fellow at Harvard University where he completed his MA and Ph.D. He taught at the American University in Cairo and the University of Alexandria in Egypt.

The poet was a founder member of the European Community of Writers, and was the European editor of The Transatlantic Review.

Collections of his own poems include The Road Taken: Poems 1956-1996 and The Wandering Celt. He also published 12 collections of translated poetry, including Kurdish Poems of Love and Liberty in 2005.

He received the Patrick and Katherine Kavanagh Fellowship in 2004.