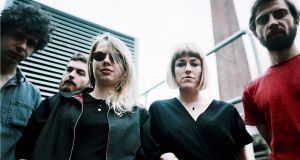 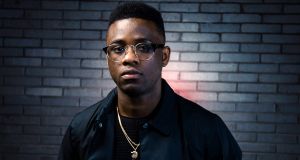 Solar Bears - Wild Flowers
The Irish duo's skill for concocting shimmering electronic music that sounds like it was discovered in an attic is once again to the fore for the newest Solar Bears' track, from upcoming third album Advancement through Sunday Best, outon March 18th. As the duo told the Quietus recently, those textures come from “micro-samples” and degradation of those sounds.


Damola – Work Flow
From the new-school of Irish rap, Damola is a Dublin-based MC who is part of BackShed Inc crew which also includes Sam Ojo, Ange MC and director Steven Beatsmith, who made the clip below. Work Flow, the rapper's latest track from the ChildLIKE Mentality EP, has a freestyle quickfire feel with a production inspired by the US zeitgeist of minimal electronic rap beats.


Hazing - Nervous Signals
Max Rocha's Happy Valley Records is a relatively new label but so far the label's defining sound has been delicate atmospherics through releases from Cloud Castle Lake and Lung Dart. The label's new release is more direct. Nervous Signals from Irish/Danish artist Hazing, taken from an upcoming EP sounds like vintage New Order with a reverb effect on the production.

Damien Lynch - The Heights
Stirring synthesizer electronica from the Dubliner who is normally known as Diamond Dagger. This 12” release comes out on New York label of repute ESP Institute and takes a softer tack than Lynch's music normally does.

ALBUM OF THE WEEK
The Altered Hours - In Heat Not Sorry
With their sound firmly shrouded in guitar haze, the Cork-based five piece's debut album leaves no doubt about their influences of alt-guitar rock of the late 1980s and early 1990s incorporating My Bloody Valentine-style atmospherics, shoegaze histrionics and stoner psychedelic rock dynamics. The MBV grip can be heard on the languid rock of Silver Leather and the gaping tones of Who's Saving Who while Birds' spoken word squall recalls Sonic Youth. But when things deviate from that template, the band start to carve their own identity, particularly on the album's latter half. Saviours' slow and crystalline piano intro, the pastoral Virgin's Sleeve and the honey-toned hypnotics of Grey On Blue are signposts to further alterations. In Heat Not Sorry is a pleasing and detailed work of the genre.

NEW ARTIST OF THE WEEK
Ex Grace
Sharon Gaynor and Eoin Grace's project is emphatically different than most Irish music around at the moment, because its primary colours are shades of pop and R&B. In fact, they claim they've made an album of “such originality”, they've dubbed it Smart Pop. While that's an extravagant claim, Ex Grace's debut album certainly has some refreshing qualities trading in bright synth-pop (Things Unseen), funky brass (Hero Zero), digital soul (This Change Is Made For You) and production-tapered R&B (Human In Unison).

REMIX OF THE WEEK
Elm – Amends (Daithí remix)
Daithí is back on the remix trail giving the “alternative baroque pop” of Dublin quintet Elm a beat assist.