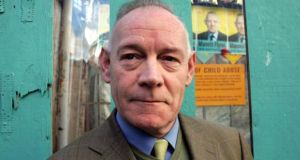 Independent councillor Mannix Flynn said the €100,000 International Impac Dublin Literary Award is a “grandiose gesture” when most artists in the city are living below the poverty line. Photograph: Cyril Byrne

The prestigious International Impac Dublin Literary Award, which at €100,000 is the world’s largest cash prize for fiction, will be funded entirely from public money for the first time this year with efforts in train to find a new sponsor.

With the 20th winner set to be announced later this month, there are no immediate plans to remove the renowned sponsor title even though a trust fund it established to back the prize ran dry last year.

Impac, the defunct American productivity company, which had its European headquarters in Dublin, ceased trading in the mid-2000s and its founder and president James Irwin died in 2009.

This year the €100,000 prize and a further €80,250 in administration costs will be entirely sourced from the coffers of Dublin City Council.

Despite consequent calls for its name to be reconsidered at a recent meeting of the city’s Arts Strategic Policy Committee, officials said they see no value in scrapping the valuable branding at this stage.

The winner of this year’s prize is to be announced on June 17th while in the background, Dublin City Council continues to seek an alternative backer for the celebrated gong which is awarded to an individual literary work in the English language.

“We are actively exploring suitable potential partnerships to support the future funding of the award,” the council confirmed.

The prize was established in conjunction with Impac in 1994 and sponsorship funds were provided via a trust fund. However, by the end of 2013 it had just €10,000 left which went toward last year’s prize with the remainder provided by Dublin City Council. The trust fund was wound up last year.

The council explained that, much like the exalted Booker prize whose sponsorship also came to an end but whose name remained a permanent fixture, the global reach of the Impac title remains of considerable value.

“The award is widely known internationally as the ‘Dublin IMPAC’ and we see no benefit in losing that name recognition in the short term,” it said.

“It is possible that the name of the award would need to be changed if a new partner comes on board and so we see no advantage in changing the name now, only to have to change it again when [AND]if a new partnership is agreed.”

The issue was raised by Cllr Mannix Flynn at May’s Arts SPC meeting in which he asked that the name be reconsidered given the end of the financial relationship with the defunct company.

Speaking to the Irish Times, Cllr Flynn expressed doubt the amount of money budgeted for the award was appropriate given recent strains on public finances.

“It should be called the Dublin City Council City of Literature award or at least it should denote that the city backs the award [FINANCIALLY],” he said, adding the money might alternatively be spent in other areas.

“There is absolutely no sign of a [NEW]sponsor whatsoever on this. It’s a grandiose gesture when you have a city that is suffering from great austerity and the vast majority of artists are living well below the poverty line.”

Hannah Lynch: ‘the most gifted woman Ireland ever produced’
7

No Fixed Abode: Life and Death Among the UK’s Forgotten Homeless
Real news has value SUBSCRIBE