‘There are very few songs about the famine. It was skipped over’ 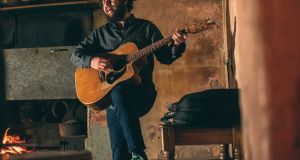 Declan O’Rourke: “There are very few songs about the famine. Musically, I think it was skipped over.” Photograph: Dara Munnis

Some 15 years – or in reality – three generations in gestation, Declan O’Rourke takes another bold step along his picaresque creative path with the release of Chronicles Of The Great Irish Famine this month. Training his considerable songwriting skills on a subject that’s approached and avoided in equal measure, O’Rourke mines the darkest corners of the horrors of the Irish famine with a sensitivity that animates a raft of highly personal stories.

Inspired by John O’Connor’s The Workhouses of Ireland, a book O’Rourke came across by chance, it led him into a chapter of Irish history about which he had known little, and yet it was one he felt an instinctive impulse to bear witness to – and family history had no small part to play.

“Around 2000 or so, I learned that my granddad was born in a workhouse in Gort,” O’Rourke recalls, recounting the intrigue he felt at that discovery. “I didn’t really know what that meant but I wanted to find out more about it. About two months later, when I came across John O’Connor’s book. I opened it up on the bus on the way home that evening, and it hit me between the eyes. I had no idea that the workhouses had anything to do with the famine. I didn’t know much about the famine at all, the same as everybody else.

“But the first page had this very human story about this family from Macroom: how this man carried his wife home from the workhouse, mile after weary mile. He got back to their little cottage. She was dying. He tried to keep her feet warm, holding them to his chest, and they found them both like that the next morning. I was just floored, and wanted to write about it straightaway.”

As O’Rourke worked his way through the book, he encountered countless other personal stories and it dawned on him that one song wasn’t going to do it.

“There’s just so much material here,” he says, as animated now by his discovery as he was 17 years ago. “There are very few songs about the famine anyway. Musically, I think it was skipped over. I know Frank Harte had a record called The Hungry Voice, but I avoided listening to it while I was writing this [album] because I knew that if I heard certain things, it would colour my own songs too much.”

O’Rourke just kept reading and reading. About 25 books in all. And the more he read, the more he came to the understanding that, as the late Dublin singer and song collector Frank Harte said: “Those in power write the history, while those who suffer write the songs.”

“History books are full of academic renderings of the information and I wanted [my work] to be personal accounts,” he says. “That’s the kind of thing I was searching for, and that was the stuff that there was the least amount of in the books I read.”

One of the most striking aspects of listening to these deeply lyrical songs of loss, of longing and of forced exile is their contemporary resonance. It’s enough to send shivers down the spine of the most objective listener.

O’Rourke nods. “They do. Stories of people leaving their homes en masse. Exile and emigration, and people travelling in vessels that are not fit for carrying people. I was very aware of all that, and it was in a whole other realm, but I felt that the best way to address it was to stay within the power of a personal story, because I think there’s a kind of universal empathy there. I think they teach us empathy. They’re kind of instructive in that way. Because you place yourselves in those shoes.”

O’Rourke’s discovery of his own grandfather’s experience of being born in a workhouse resonated deeply. It’s not for nothing that he’s made a home for himself in Gort. That sense of where he’s come from filters through his writing like a musical double helix.

Fear and loathing played no small part in colouring the historical accounts of that time, O’Rourke insists. And it was something he felt he could counter through his own writing.

“Most of the poor were illiterate, or not literate is a better way to say it, I think,” he says. “It’s understandable that people didn’t want to talk about it: the fear of it happening again; the trauma. I only realised that recently when someone said to me that it’d be great to go around schools and teach this, and I thought ‘how could you explain that to children? How could you actually describe hundreds of thousands of people starving to death all across the country?’ And that’s the first time I really understood why people didn’t want to talk about it.”

Stylistically, O’Rourke has been variously described as a classic songwriter (Paul Weller), a balladeer (the New York Times) and the missing link to The Inkspots (John Prine). On Chronicles, he collaborates with the finest traditional musicians: The Dubliners’ John Sheahan, piper Mike McGoldrick, harpist Floriane Blancke, accordionist Dermot Byrne, and many others. Was it a stretch for him to write songs in such a distinctly traditional idiom?

“Above all else, I consider myself a storyteller. That’s where I feel most natural, writing,” he says. I don’t know whether that’s a cultural thing. I think it’s our human way of communicating. And I think you have to be gripped by a story in order to be able to write about it yourself. You write about what moves you.

“Stylistically, it’s the music I was raised on, that I loved, and that I couldn’t access as a writer before,” he continues. “It was my basis for learning music. As a teenager, I loved Planxty, Paul Brady and Andy Irvine. The complexity of their music was a great thrill and challenge for myself and my friends back then, as budding musicians, and we never forgot that. And they’re still among my favourite records of all time. So I was always aspiring to find my way into that one day anyway.”

With the Caravaggio-inspired hyper-realism of the album artwork, and the arc of the song cycle, Chronicles is, O’Rourke believes, the most consistent album he’s made. Never a man to follow expectations, O’Rourke mulls over the trajectory his career has taken since the release of his debut, Since Kyabram in 2004.

“Even though each of my previous albums were what they were, I think they’ve all been part of who I am now. All of it has come together at this point. Some of the things I have noticed about myself as an artist over time is that I don’t like treading on the same ground. If you had a palette of different colours as a painter, why would you limit yourself to red and white?

“We are growing up in the world today so influenced by so many cultures and sounds, and while you need to anchor yourself in your own identity, you also need to explore. I think it makes you a better artist.

“I’m still experimenting and learning. Who knows? One day, I might master it.”

Chronicles Of The Great Irish Famine is released on October 27th by Warner Music. O’Rourke embarks on an Irish tour in December. odeclanorourke.com