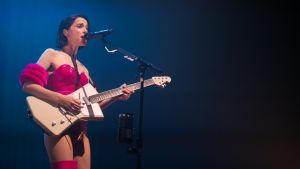 With no band and just a rotation of bright and colourful guitars - all designed by her - for almost every song and a backing track, Clark stands rigidly onstage, moving only when the lights go off or the curtains are pulled. Every time the lights change, she’s in a new position onstage; the most impressive is when she lies flat on her back while singing and playing guitar for Strange Mercy.

As she goes through older songs like The Strangers, Cheerleader and Cruel, it’s choreographed to an inch, drawing comparison to the mechanical movements of David Byrne in Talking Heads’ concert film Stop Making Sense. She’s showing us what she wants us to see - nothing more, nothing less - as she builds up the latest music from her new album Masseduction, where she bares her all.

“I can say in all honesty that you guys are my f**king favourite,” she says, adding later that she always felt a connection to Ireland because of her ability to “drink a f**k ton and remain on my feet”. And thanks to a genealogy test, she can now confirm that she’s 80 per cent Irish. “It’s not bullshit when I say I love you very much, my brothers and sisters.”

She uses Digital Witness and Birth In Reverse to close off the first half of the show, before easing into the new phase of her music by playing her Masseduction from start to finish. Compared to her past tours, where she throws herself around the stage and into the crowd, she is very still and the lack of a band onstage emphasises this. She’s reflective to the point where she’s practically sombre and when she sings Happy Birthday, Johnny and New York, she puts the guitar aside and there’s a profound sadness in her.

It’s a performative unravelling of sharp emotions and Clark’s evolution as an artist allows her to experiment with gig formats. This is a controlled show, almost robotic in its movements but when she speaks, there’s fragility and warmth.

“It feels like the end of an action movie with lava coming up through the cracks in the sidewalk. Taxis crashing and planes falling out of the sky,” she says, “but we can run to each other when the buildings are fallings.”

She invites us to use music to get through the difficult times in the same way that she has done, before bringing the set to an end with the heart-heavy Slow Dance and Smoking Section. As the curtains are pulled to a close from either side, she remains on stage, smiling and waving until we can’t see her any more.