The week’s best rock and pop gigs: From All Tvvins to Belinda Carlisle 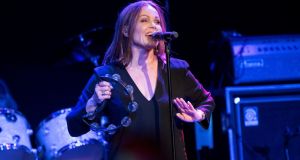 State Lights
Whelan’s, Dublin
They aren’t the newest Irish band on the block, but they’re certainly one of the hardest-working. Following a sold-out headline show at Dublin venue the Workman’s Club, and then a successful performance at the recent Electric Picnic festival, State Lights headline their largest hometown show yet. Over the past few years, the band have sharpened up their material, ensuring key issues such as melodic hooks are at the forefront of their radio-friendly songs. A band still in with a good chance? Yep. TCL

Epoch x Assemble Agency present: Kerrie Anderson and Alan Assemble
Factory, Galway
Based in Manchester since 2010, Irish DJ Kerrie Anderson will be coming home for a headline set that will see her mix in everything from alien acid to hypnotic techno and meditative drone, as well as ambient, dub, EBM and house. Assemble Agency’s very own Alan Currie will be flying in from Glasgow, where he regularly plays in La Cheetah, to join Anderson behind the decks. LB

Gash Collective with Baiboc, Kate Butler & Lolz
The Bernard Shaw, Dublin
As the closing date (the end of October) for the Portobello version of the Bernard Shaw draws clearer, we will see many farewell parties take place in the southside venue the coming weeks. This weekend, Gash Collective will be throwing their final Shaw party with special guests Baliboc, Kate Butler and Lolz in tow. Of course, farewells can only last so long and we’ll be celebrating firsts when the Shaw relocates to its new Phibsborough home. LB

All Tvvins
Black Box, Galway ; also Thursday 10, Spirit Store, Dundalk, Co Louth ; Friday 11, INEC, Gleneagle Hotel, Killarney, Co Kerry; Saturday 12, Set Theatre, Kilkenny
Not for Conor Adams and Lay Kaye a few months off for rest and recreation. After the release earlier this year of All Tvvins’ second album, Just to Exist, the pair immediately dived into writing and recording a fresh batch of songs. New single, Divine, is the first inkling of the results of such a sturdy second creative wind, and there will, no doubt, be more of where that came from on this slew of tour dates. The pair continue touring until the end of this month with gigs in Wexford (Spiegeltent Festival, Friday, October 25th) and Sligo (Sligo Live Festival, Saturday, October 26th). After that it’s three nights in Whelan’s, Dublin, (November 12th-14th). Like we said, no time off for these two. TCL

Nighthawks at Cobalt
Cobalt Cafe, 16 North Great George’s Street, Dublin
Another Nighthawks event, another great multi-stranded evening’s entertainment. Comedy comes in the shapes of Davey Reilly and Gerry McBride, spoken word is presented by Eoin Rogers and Lorna Quinn. Music, meanwhile, sees the return of cellist and songwriter Vyvienne Long, who will be previewing songs from her forthcoming album. Other music guests include Australian singer-songwriter Melanie Horsnell and Dublin songwriter EllyD, who embarks on her own solo dates shortly. Another Nighthawks evening. Another winner. TCL

Little Mix
The SSE Arena, Belfast. Also Tuesday 8, Wednesday 9 and Thursday 10, 3Arena, Dublin; and Sunday 13 and Saturday 14, The SSE Arena, Belfast
Little Mix are fitting in as many dates as possible to make up for their two-year absence from our shores. This is one of the hottest pop tickets in town, and seeing as LM5 is probably their best album to date, their live show should be bigger and better than ever before. LB

Bounce Club Night
Róisín Dubh, Galway
Bounce is a monthly club night for adults with intellectual disabilities that’s hosted by Róisín Dubh in the main space. With no entry charge, it’s a fun, safe and accessible space for people of all abilities and it runs from 8pm until 10.30pm. The DJs will play pop, rock, hip-hop and R&B songs for everybody to get their Monday evening boogie on. Bounce is supported by That’s Life; an arts programme run by the Brothers of Charity Services Galway. LB

Belinda Carlisle
Vicar Street, Dublin; also Wednesday 9, Opera House, Cork
Californian singer and performer Belinda Carlisle has been on the scene from the mid-1970s, initially as a drummer in the Los Angeles punk group Germs, and then – much more successfully – as the lead singer in the Go-Go’s, one of the most successful ever all-female music acts. That group split up in 1985, and while they have sporadically regrouped, it is Carlisle’s solo career that has sustained her. Live shows balance her best-known solo hits (including I Get Weak, Leave a Light On, and Heaven Is a Place on Earth) with some Go-Go’s hits (notably We Got the Beat and Our Lips are Sealed). TCL

Slowthai
The Academy, Dublin
(Also Friday 11, The Academy, Dublin)
Even though he didn’t walk home with this year’s Mercury Price for his 2018 album Nothing Great About Britain, Northampton rapper Slowthai definitely stole the show. Channelling the rage and disbelief that so many people feel about Brexit, the 24-year-old held up a dummy head of Boris Johnson during his performance of Doorman. As provocative and passionate on stage as he is on record, he has firmly made his mark as one of the strongest voices in the British music scene. LB

JyellowL
Whelan’s, Dublin
JyellowL (Jean-Luc Uddoh) is well on the way to being a firm and favoured fixture on the Irish hip-hop scene. Recently he received a handy career nudge via the inclusion of his tune Ozone, which has been featured on the soundtrack for Fifa 20 (being in the company of Major Lazer, Logic, Foals and Post Malone won’t harm his chances one iota). Meanwhile, JyellowL is finalising the track listing for his forthcoming debut album, due for release in the first quarter of 2020. TCL

Look Mum No Computer
Whelan’s Upstairs, Dublin
London-based Sam Battle clearly belongs to a lengthy line of mavericks who love music for all the right reasons, yet who is viewed by the various sections of the music industry as someone they’d rather not do business with, thank you very much. Battle, however, has a USP: he’s a musician who invents instruments. Taking the DIY aesthetic to a different level, Battle has a challenge on his hands with the transportation of them, but the end results (think electronic music as played by Power Rangers) are enthralling. TCL

Pulled Apart by Horses
The Workman’s Club, Dublin
Support slots to Biffy Clyro and Foals? Records produced by Foo Fighters and Pixies guy Gil Norton? It can mean one thing only: a rock band so dynamic that it can look a lion’s mouth close up and not be scared. The Leeds band deliver songs that may stick to a certain formula, but when that formula includes gut-punch riffs and taut, muscular rock music, you won’t find many people walking away from their gigs complaining. New material will be played, as well as tracks from their previous four albums. TCL

Beatvyne’s Music x Tech Experience
RDS, Dublin
This festival-style seminar/conference features a hybrid of music, tech and multimedia leaders/innovators as they discuss what comes next in the entertainment industry. Topics include the “audiovisual explorations of the sounds and spirit of Sigur Rós” (whose Georg Holm will be in attendance), what role music plays in urban ecosystems, and the resurgence of vinyl. There is also a local music element, and so Irish acts such as Roe, Pursued by Dogs, Rachael Lavelle, Ailbhe Reddy, Lowli and Sylk will be performing across the two-day event. Until Saturday 12th. TCL

Squarehead
The Workman’s Club, Dublin
Squarehead lock into the zone populated by those cheeky people in the Popical Island collective. In other words, down through the years the musicians have been members of many groups, ducking and diving from one to the other as time, circumstance and inclination allow. This gig is the launch show for their latest album, High Time (which this paper recently described as “a fine return from a band evidently with a lot still to offer”). Special guests are Soft on Crime, a band comprising former members of Irish bands such as Jubilee Allstars and Pet Lamb. TCL

Kara Marni
The Workman’s Club, Dublin
Having made her Dublin debut earlier in the year at the Eastbound Festival, London R&B singer Kara Marni is making her return. Starting out as a YouTube sensation and covering songs by Minnie Riperton, Whitney Houston Sade, she took her career into her own hands by enrolling in the Brit School for Performing Arts before she was discovered by a talent agency. Now channelling neo-soul acts such as NAO and Erykah Badu, she’s honing her craft and, in time, will be a name known to many. LB