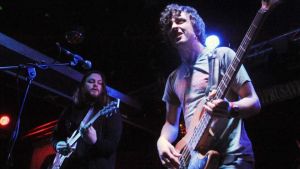 Introduced by some excellent human beatboxers and a man in a pirate costume, the Redneck Manifesto play their first gig in six months on a landlocked pirate ship.

It’s nice to see these six men hard at work on their musical machines. There’s Richie Egan alternatively banging, plucking and holding his bass over his head flanked by Matthew Bolger and Niall Byrne fretting and noodling, flanked in turn by Glenn Keating and Neil O’Connor who type frenetically on vintage synths, bash supplementary percussion and clap their hands, all powered from behind by inhuman drumsmith Mervyn Craig. The Redneck Manifesto have been around a long time and play a post-hardcore, groovy, trancey, prog thing. It is a good thing.

There’s a rough formula to their arrangements, one member of the band plays a fluid/staccato/erratic/melodic musical motif and various other band members then take it up - subverting it, marginally altering it or twisting it before sporadically joining together in unison for juddering bursts of unified clanking noise. Every member of the band is virtuosic and they’re a joy to dance, watch and listen to. The Rednecks have a very coherent manifesto.