If this album was intended as a riposte to the oppressive regime, it packs more punch than a million angry words 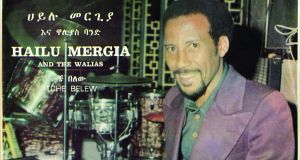 The Walias Band’s name derives from the walia ibex, an endangered species native to the mountains of Ethiopia. They were formed in the early 1970s as a house band for the Hilton Hotel. At a time in which the military Derg was turning the screw on the music scene in Addis Ababa, they chose their name well.

The band’s residency was the best in town with many luminaries in the ranks to match their stature. Hailu Mergia is the nominal leader here and his distinctive touch on the keys is an outstanding feature. His career had begun playing accordion as a boy scout in the army. A deeply instilled musical curiosity led him to experiment with more modern sounds and instruments. By 1977, when this LP was recorded, he was switching between an electronic organ and Moog synthesiser, and re-purposing folk songs into funkier modern melodies.

Girma Bèyènè, arranger of some of the most seminal recordings of the golden age, is co-pilot on production duties. The hard polyrhythmic funk sound has lost none of its edge four decades later.

The other key component is the vibraphone mastery of Mulatu Astatqe. This was his only appearance with The Walias Band. Astatqe was another maverick who had been schooled in London, New York City and Boston, where he combined his latin and jazz interests with traditional Ethiopian music. Like Mergia, his ability to straddle these worlds brought the band into uncharted territory.

For all the pressure that was being exerted on the musical scene at the time, this album bristles with excitement. So infectious and forceful is the rhythmic push, the lack of vocals is inconsequential. If it was intended as a riposte to the oppressive regime, it packs more punch than a million angry words.