For a singer whose star has supposedly been on the wane, Lady Gaga is fighting one hell of a rearguard action 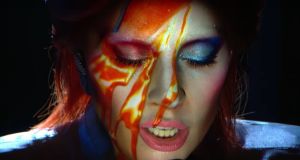 Chicago country rockers Max Kakacek and Julian Ehrlich conceived their new band Whitney’s debut album as “a record that sounded like it was by an old-ass dude living alone”. On the evidence of this wistful break-up ballad, they’ve succeeded: the lush strings and horns undermined only slightly by the fact that, at the song’s most emotionally charged moments, drummer/vocalist Ehrlich’s nasal falsetto sounds uncannily like Pee Wee Herman.

Election 2016 has inspired musical odes to candidates by country n’ Irish stalwarts the length and breadth of the land. But now our most marginalised political constituency has finally found it’s voice: goddamned hipsters. Shrug Life are an indie pop act from the Popical Island stable. Lyricist – and Morrissey-soundalike – Danny Carroll’s take on matters the state of the nation (“A country built on brown envelopes, golden handshakes and blue blood...”) is withering and sophomoric in about equal measure.

For a singer whose star has supposedly been on the wane since 2013’s Artpop album flopped, Lady Gaga is fighting one hell of a rearguard action. In the past few weeks alone, she’s won a Golden Globe, sang the national anthem at the Super Bowl and performed this Bowie tribute at the 2016 Grammys. It’s blitzkrieg bop through eight of the man’s greatest hits. My only complaint is that the red wig makes her look more Bette Midler than Ziggy Stardust.

Patrick Freyne: Homeland is a tool for teaching Americans geography
7