The RTÉ NSO’s performance packed tremendous punch, if a bit out of control 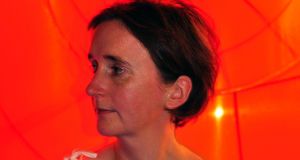 Composer Karen Power: The performance in Heuston train station was true to the spirit of the Fluxus movement.

A man is joyfully jumping up and down. On a grave. He is cheering, savagely, fists raised. “In your face,” he shouts. “You are gone. I’m still here.”

Conduct unbecoming. Except the man lying in the grave is Joseph Stalin, and the one dancing on it is the composer Dmitri Shostakovich.

Okay, so this didn’t actually happen. But it’s what I usually picture inside my head when I hear the final moments of Shostakovich’s Symphony No 10, composed in the months immediately following Stalin’s death in March 1953.

The composer had good cause to celebrate. For almost two decades he had lived under threat of imprisonment or execution after being denounced by Stalin and the Communist Party via Pravda in 1936. So many of Shostakovich’s friends, colleagues and family members had been censored, banished or executed that he could not help but live his life in fear.

And then, having responded – in one way or another – to prescriptive official influence in the ensuing five symphonies (Nos 5-9), Shostakovich let loose in No 10 once his nemesis was dead.

Or at least, that’s how it sounds to me, and how it sounded when the RTÉ National Symphony Orchestra performed it on Friday night under the direction of conductor Michal Nesterowicz. In particular, what so easily conjures up the dancing-on-the-grave image is the boisterous reiteration of the four-note signature motif that Shostakovich derived from letters in his name (the first time he does this in a symphony).

There is also the reappearance upon his sound palette of a sarcastic edge, much muted since his official denunciation during Stalin’s “Great Purge”, which ultimately claimed the lives of hundreds of thousands of Soviet citizens. And there is the presence of glee, notable because so many of his symphonic finales are weighty and serious. The Tenth is a selfie taken at a moment of ecstatic personal relief.

Shostakovich, of course, is quoted as saying that the Tenth had no programme, alongside of which there remains the infamous wrangling among music academia, the composer’s family and the claims of Solomon Volkov as to what Shostakovich did or did not intend to say in his music.

Happily, we are permitted to bypass all of that, thanks to the notion of the autonomy of the text, and combine whatever facts we know with the sound we hear and respond however we wish. For me, it means Shostakovich’s triumphant dancing in my mind’s eye.

Although Nesterowicz didn’t always exact the firmest control in this performance, he unleashed tremendous punch in these climactic closing moments and in the high-speed, high-energy fury of the second movement. And he helped realise the mood of poignant reflection that characterises much of the rest of the symphony, out of which emerged many beautifully taken solos, notably those for clarinet, flute, horn and bassoon.

What a contrast with the piece that preceded it before the interval. Utterly void of anything resembling triumph or sarcasm, Latvian composer Peteris Vasks’s gentle 1997 violin concerto Distant Light sustains an air of nostalgic longing and regret.

Nesterowicz sometimes allowed the overall direction to meander somewhat, but the solo playing of violinist Elina Vähälä was quietly, deftly virtuosic and spoke with a human voice.

There were actual human voices speaking on Thursday night, as the Dublin-based Kirkos Ensemble performed Karen Power’s those are the dangers of round vegetables next to the railway platforms in Heuston Station. Only one of the voices belonged to a performer. He spoke in short, repeated phrases, sometimes intelligibly, or sighed or groaned as he moved about the concourse.

Among the other voices were those of bemused spectators, notably two middle-aged men who were plainly intrigued by what was happening and tried to interact with the players. They called out enthusiastically to each other to draw attention to a violinist wandering off one way or a flautist in another.

It was the desired effect. The event, part of Kirkos’s Fluxfest, was the kind of provocative invasion of public space associated with the 1960s Fluxus movement, whose defining concepts include interdisciplinary performance, anti-art, and audience interaction.

Although it was a quiet time passenger-wise in Heuston (adding considerable value to the reactions of the two men), the ambient sounds of the cavernous station made it all but impossible to hear the handful of live instruments – including toy piano – or the electronic component of Power’s piece, which she generated from an amplified laptop. But perhaps this, too, was part of the desired effect.

The desired effect of Sunday’s concert in the Hugh Lane Gallery by contemporary ensemble Concorde was celebration. The ensemble turned 40, and founder Jane O’Leary – to whose music the programme was devoted – turned 70. The pieces ranged from 1993 (Silenzio della Terra for flute and percussion) to 2016 (the world premiere of between two waves of the sea, inspired by lines from TS Eliot). Also included was A Way Through (2013), fittingly accompanied by a projection of Marie Hanlon’s slow-changing photographs taken in wintertime at Annaghmakerrig.

In her spoken introductions to each piece, O’Leary avoided describing any desired associations or response. Instead she repeatedly stressed her hope that audience members would allow images to form in their own minds. The overall mood of her selection of five works was calm, meditative and indeed amenable to random imaginings.