Steven Ellison set out new musical territory with his new album, and he’s got a live show that’s every bit as ambitious 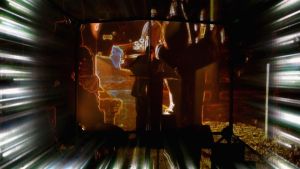 It’s hard not to get a little fanatical when it comes to Flying Lotus. There’s the future-proof feel of his records, which explore new territory and map out directions for the rest of his musical disciples to follow. There’s his willingness to grapple with the big issues, never more so than on his latest album You’re Dead, which looks into the abyss with shrewd sophistication. And then there is the full onslaught of his live show, a technicolour, 3D image-spinning musical journey into some strange other ever after. If cults were this fun, we’d all be joining.

Here, Steven Ellison takes to his custom stage in no little hurry and with no little style; white shirt, black tie, and a faux gas mask with eyes that glow like orbs in the ether. He holds position between two projection screens and pumps out the tracks amid the swirling, kaleidoscopic colours and shapes created by David Wexler and John King.

The images shift as frequently as Ellison’s musical instincts. Like the music, they’ve got a knowing retro feel and a clinical futuristic execution: videogame vectors are contrasted with mountains of sci fi features while Ellison punches our samples from Mortal Kombat over the rolling beats of his next gen tunes.

For the second act of the show, support comes from the mercurial Thundercat, who arrives dressed like a protean tribal elder. He prefers the higher melodic ground to the low end rumble of Ellison’s beats, and jams bewildering basslines over Ellison’s well marshalled musical chaos. Ideas surface and disappear, riffs are thrown and traded. This is two pros at the top of their improvisational game, never more so then when a single hummed few notes suddenly turns into the full swagger of Dead Man’s Tetris.

The only question left is how to deal with the end. Ellison comes out from behind his screens and picks up the flow on the mic before leaving with a closing salute of Never Catch Me and a soaring visual tour around an impossible cityscape. Consider us all converts.

Steve Coogan: ‘Come Out, Ye Black and Tans is two fingers to the British’
3 Why Dr Seuss is the real hero of children's literature
4

Dancing with the Stars: Shock exit for teary-eyed Sinéad O’Carroll
6

The wise man, a short story by Donal Ryan
10 How close were Shelley and Keats?
Real news has value SUBSCRIBE