Recording has turned the musical experience on its head 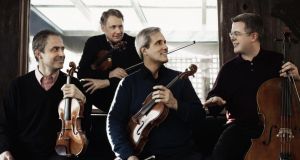 The Emerson Quartet are no strangers to the challenges and possibilities of the recording studio, and they have nine Grammy awards to prove it

It’s a sobering thought, not least because when people talk about listening to this or that performer, or this or that piece of music, they’re usually not talking about a flesh-and-blood occasion, but a recording.

There have been peculiar historical bumps along the way. I’ve heard stories of people being drawn to concerts through records and expressing disappointment at the live performances. The bass wasn’t loud enough, they complained. They had been using tone controls or equalisation to adapt the sound at home in a highly personal way, and they were surprised when the real thing begged to differ.

I was once told of a record-raised music lover who, at his first concert, was perplexed when everyone around him started clapping at the end of Brahms’s Second Symphony. On the disc he’d been listening to the symphony was followed by the Academic Festival Overture. He’d listened to the two in sequence so many times that the symphony didn’t seem finished unless it was followed by the overture.

It’s a strange paradox that recordings made before the advent of tape and the LP are in one key way guaranteed to be more truthful than recordings which take advantage of more advanced technology. A 78rpm record could accommodate up to around four minutes per side, and those four minutes could not be edited to fix mistakes.

The only remedy was to do the whole four minutes again. Since the adoption of tape in the middle of the 20th century, corrections of a fraction of a second have been commonplace, and since the arrival of digital recording the possibilities have expanded beyond most people’s imagining.

The perfectibility of recordings had an effect on what was heard in concerts. Errors of all kinds, wrong notes, glitches of memory, lapses in intonation and other accidents of the moment that used to be tolerated, became less acceptable. The recording became the standard by which the concert was judged.

There were losses. Spontaneity, unpredictability and experimentation suffered. And there were gains. Technical standards were driven upwards and eccentricity was curbed. I’ve even heard it argued that reliability came to triumph over inspiration, though I’ve never bought that argument myself. Inspiration has always tended to be a rarity.

You could compare the broader issue to the retouching, airbrushing and photoshopping of visual images. What’s real, you may well wonder, not just about Soviet photographs that carefully removed all trace of individuals who had fallen from grace, or the impeccable appearance of a model on the cover of a fashion magazine, but also about virtually any modern recording you put in your CD player, download to your phone or computer, or stream online?

Not all trickery is hidden. Landmarks in up-front fakery include: Jascha Heifetz playing Bach’s Double Violin Concerto with himself in 1946; a selection of Bach and Handel arias by Kathleen Ferrier which, after the great contralto’s death, were overdubbed from mono into stereo through a new recording by the original orchestra and conductor (the London Philharmonic and Adrian Boult); and a recording of Saint-Saëns’s Organ Symphony with Daniel Barenboim conducting the Chicago Symphony Orchestra in Chicago, and the organ part recorded separately by Gaston Litaize in Chartres Cathedral.

Closer to home, Frank Patterson got to duet with the long-deceased John McCormack, and the multitalented Derek Bell released an album provocatively titled Derek Bell Plays With Himself.

The Emerson Quartet, who played at the National Concert Hall on Monday, are no strangers to the challenges and possibilities of the recording studio, and they have nine Grammy awards to prove it. They also recorded Mendelssohn’s Octet by themselves, and made the smart move of using two sets of instruments to help create a sense of eight rather than just four musical individuals.

They are a paragon of polish, refinement and even-handedness – they’re one of those quartets in which the two violinists (Philip Setzer and Eugene Drucker) take turns in the leader’s seat.

They’re relative strangers to Ireland, and although they’ve been on the go since 1976, they didn’t play here for the first time until 2012, when they shared the bill with James Galway. Their founding cellist David Finckel was then on his last season, and Monday’s return was given with his successor, Paul Watkins, who is a conductor as well as a cellist, and was principal guest conductor of the Ulster Orchestra from 2009 to 2012.

After two years and one member change the Emersons sounded like a radically different group, lighter and leaner in tone, more relaxed and conversational in delivery, and more easy-going about drawing attention to what you might call interpretative point-making. Compared with the musical identity of their recordings, it was as if they had had a makeover that was subtle and thorough. They were still themselves, just not quite their old selves.

The new manner has brought a kind of neutrality that allows the music to seem more as if it’s speaking for itself. Sure, there were moments of musical legerdemain when they handed material between them in totally unexpected ways. But they managed the rare feat of making the newly reconstructed discourses sound like observations rather than special pleading.

Their style has become sparer, less concerned with projection, more focused on drawing listeners in than in projecting directly at them. The programme – Haydn’s “Joke” Quartet, Ravel’s Quartet in F, and Beethoven’s late Quartet in B flat with the Grosse Fuge as finale –  was perfectly gauged for contrast and range.

The Beethoven in particular had moments that betokened the stillness of wisdom. Its culmination in the borderline incoherence of the Grosse Fuge brought the audience enthusiastically to its feet.