The references and riffs come thick and fast in a performance that becomes a theatrical, immersive experience 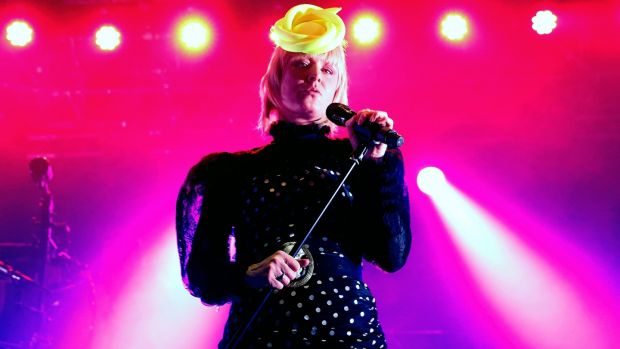 “Who is the real Róisín Murphy?”, asks Róisín Murphy, near the end of her powerhouse performance at the Olympia, her first headline show here since 2008. That night we had much of 2007’s Overpowered, as well as a cover of Bryan Ferry’s Slave to Love, and a playful sense of dress-up.

Tonight everything has progressed to a more subtle and more subversively brilliant standard. Before she is on stage we see her, on a huge screen, waiting in the wings, a camera following her as she dances on, like a younger rendering of Alan Bennett’s Lady in the Van, replete with headscarf.

The shorthand she enjoys with her five piece band translates so well; at different turns there are possible references to Funkadelic, The Fall, Grace Jones, and Italo-disco, and while there is nothing from Ruby Blue, there are nods to Overpowered, with the title song gloriously reconfigured with added banjo, as well as rich versions of Let Me Know and Dear Miami.

Much of tonight is about Hairless Toys, her most recent, beguiling piece of work. The tender love song Unputdownable showcases her magnificent voice, which backs on to the synth-heavy Evil Eyes, and Exploitation is elegant and edgy, folding in Moloko’s Sing it Back, acknowledging Murphy’s musical history while threatening to raise the roof.

There is work from her 2014 EP Mi Senti, which took on some Italian classics, and her version of Lucio Battisti’s Ancora Tu manages to be both poignant and playful. This duality is synonymous with Murphy: she’s constantly dressing up and dressing down, putting on and taking off, wearing masks, and throwing them away, referencing the artifice of the roles we all play. It’s a furious, theatrical, immersive experience, anchored by an earthy sense of humour (“it might surprise you to know that as a child, I liked dressing up”).

At one point she lets out a scream, and then shrugs, “you know what? I’m Irish”, much to the delight of the crowd. During encore track Exile she resembles the “Lady in the Radiator” from David Lynch’s Eraserhead, and also sounds like she’s testifying: “you know if you let me, I’ll be back with a vengeance” – of that there is no doubt. Murphy is a true original.

The Loafing Heroes: raggle-taggle songs about Casement and Kierkegaard