Q, the magazine that was once a cornerstone of the British music press, was a victim of its own success 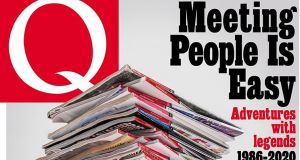 The cover of the final edition of Q magazine

It seems a strange comparison to make, but in its initial incarnation at least, Q magazine was as much a product of its era as Oz and the International Times seemed in the late 1960s, or the crudely photocopied pages of Sniffin’ Glue appeared at the dawn of punk.

It was launched in October 1986, the product of a brilliant bit of trend-spotting by its founders, David Hepworth and Mark Ellen. Both had noticed not just that sales of compact discs were steadily soaring but that music fans – particularly those of a certain age – were using the new format’s arrival as an excuse to re-buy the highlights of their record collections: “They were reliving the time they’d first heard this music on vinyl and wondering what had happened to their old heroes,” Ellen later wrote.

The music press wasn’t going to answer that question, having discarded their old heroes as irrelevant years before, in the wake of punk. What need had the NME for Paul McCartney or Pink Floyd when there were features on Stump, the Shop Assistants and Schoolly D to be written? But Q would. Their conviction in a market for this stuff was bolstered by the fact that its founders had presented the BBC’s coverage of Live Aid, an event at which rock’s old stagers – who knew exactly what they were doing, having already spent 15 or 20 years playing stadiums – almost unanimously stole the show from under the noses of pop’s young pretenders: it was Queen’s day, not Nik Kershaw’s.

And so Q – its name a play on the act of “cueing up” a CD – rushed into the vacuum. Its early issues featured McCartney, Rod Stewart, Paul Simon, Elton John, Genesis and Eric Clapton on the cover. None of them exactly at their artistic zenith in the late 80s, but all still hugely successful, and all with richly entertaining histories to talk about.

At the 1996 Q awards, Tony Blair was introduced to Noel Gallagher: the first step on the New Labour/Cool Britannia love-in

The interviews were respectful, but never fawning or hagiographic. Its founders had helmed Smash Hits in its early 80s purple patch, and something of that magazine’s irreverence, its belief that finding pop music hugely thrilling and completely ridiculous wasn’t contradictory, clung to Q’s tone.

You could sneer at Q as uncool and lacking edge (“The magazine that says ‘Hey kids, it’s alright to like Dire Straits’,” chuckled the NME’s Steven Wells) but Q was sharper than the caricature suggested. It was smart enough to realise that soul veteran Bobby Womack had a hell of a story to tell – his name was emblazoned across the cover early on. And it occasionally bared its fangs, as in Tom Hibbert’s “Who the Hell Does ___ Think He Is?”, a series of virulent, pomposity-pricking interviews.

Whatever you thought of it, Q was hugely successful throughout the 1980s and 1990s. Its covers from the latter decade offer an intriguing corrective to the nostalgia-burnished version of the Britpop era. They featured Blur and Oasis alongside artists who sold vast quantities but have subsequently been airbrushed out of the picture: Texas, the Corrs, Shania Twain, Simply Red. Its profile was further boosted by the Q awards, the annual event at which, in 1996, Tony Blair was introduced to Noel Gallagher: the first step on the New Labour/Cool Britannia love-in.

It pulled in stars other titles could only dream of snaring: Q was the magazine where George Michael gave his first interview after his 1998 arrest for “public lewdness”, and where Radiohead made an exception to their post-Kid A media blackout. It also became immersed in 100 Best lists: the 100 Best Albums, the 100 Best British Albums, the 100 Richest Stars in Rock, the 100 Greatest Singles of All Time.

That was a trend that was copied ad nauseam – the sense that Q was rather overdoing it was unmistakable by the time they came up with the 150 Greatest Rock Lists Ever – but others followed suit because it sold. Reading Q’s lists now feels like opening a time capsule of then-contemporary preoccupations: a lost world in which Kula Shaker’s K and Cast’s All Change were deemed to be up there with What’s Going On, Astral Weeks and the Velvet Underground and Nico.

The magazine’s sales went into decline in the noughties, something it seemed incapable of arresting, no matter what it tried: sticking with tried-and-tested cover stars such as U2, Oasis and Radiohead; alternating the usual suspects with covers featuring Beyoncé, Kanye West, heavy metal artists and pop stars; more lists. The issues were more than likely the same problems that plagued almost every music title – the rise of the internet (Q was hopelessly slow to claim its place on the web); the rise of pop stars either media-trained to blandness or who relied on everyday I’m-just-like-you charm, neither the source of gripping interview material. Certainly, its original USP was long gone, a victim of its own success. In 1987, no one in the music press other than Q wanted to speak to the stars of the 1960s and 1970s, but by the noughties, everyone did.

In its final iteration, under editor Ted Kessler, Q became something like the opposite of the magazine it started out as: it was wide-ranging and hip, closer to one of the now-vanished inkies than the Q of old – one recent cover flagged up features on Waxahatchee, US Girls, Låpsley and veteran dub producer Mad Professor – and promoted female writers in a realm that had once been almost exclusively male. As a one-stop digest of what was happening in music, it was hard to fault, but it wasn’t enough to save Q.

Without wishing to sound melodramatic, its closure seems to signal the final passing of the music press as we once knew it. What’s left are specialist titles, small operations surviving on small circulations and magazines that concentrate largely on the past. The latter suggests that the only people who still buy music titles in quantity are old enough to remember the music press at its height. – Guardian