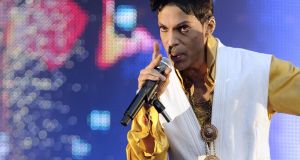 Prince performing on stage at the Stade de France outside Paris in 2011. Photograph: Bertrand Guay/AFP/Getty Images

Prince died after accidentally taking a fatal overdose of painkillers, a postmortem examination has found.

Midwest Medical Examiner’s Office’s report said the singer had taken the opioid Fentanyl and his death was an accident.

The findings confirm suspicions that opioids played a role in the musician’s death.

The medical examiner’s office said its investigation into Prince’s death had now finished and it was unable to make any further comments.

A spokesman for Carver County Sheriff’s Office said its investigation was continuing but was unable to give any further details about its progress.

Prince’s death came less than a week after his plane made an emergency stop in Moline, Illinois, for medical treatment as he was returning from an Atlanta concert.

Prince was found unconscious on the plane and he was given a shot of Narcan, an antidote used in suspected opioid overdoses, by first responders.

At least two doctors’ names have come up in the death investigation being conducted by the Carver County Sheriff’s Office, the US Attorney’s Office in Minnesota and the Drug Enforcement Administration.

Dr Michael Todd Schulenberg, a family practitioner, treated Prince twice in the weeks before his death and told investigators he prescribed medication for the singer. The medications were not specified in a search warrant for the Minnesota hospital that employed Dr Schulenberg at the time.

Dr Schulenberg saw Prince on April 7th and April 20th – the day before his death – according to the warrant.

Dr Howard Kornfeld, a California addiction specialist, was asked by Prince’s representatives on April 20th to help the singer.

Dr Kornfeld sent his son Andrew on a flight that evening, and he was among the people who found Prince’s unresponsive body the next morning, according to Dr Kornfeld’s lawyer, William Mauzy.

Andrew Kornfeld, who is not a doctor, was carrying buprenorphine, a medication that can be used to treat opioid addiction by easing cravings and withdrawal symptoms, Mr Mauzy said, explaining that Mr Kornfeld intended to give the medication to a Minnesota doctor who had cleared his schedule to see Prince on April 21st.

Mr Mauzy has refused to identify that doctor. Dr Schulenberg is not authorised to prescribe buprenorphine.

Prince’s death came two weeks after he cancelled concerts in Atlanta, saying he was not feeling well. He played a pair of make-up shows in the city on April 14th before the emergency landing in Moline. Prince was scheduled to perform two shows in St Louis but cancelled them shortly before his death.

The singer had a reputation for clean living, and some friends said they never saw any sign of drug use.

But long-time friend and collaborator Sheila E said Prince had physical issues from performing, citing hip and knee problems that she said came from years of jumping off high platforms and stage speakers in heels.