Other Voices sets up stage in the Lone Star state

Other Voices decamped to Austin for a new series. Here are 10 things learned 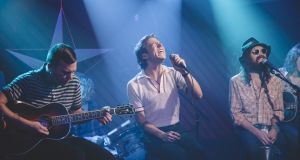 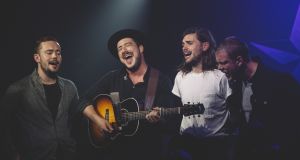 Mumford and Sons at Other Voices Austin. Photograph: Rich Gilligan 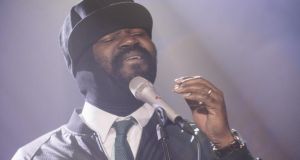 How do you replicate a winter west of Ireland festival in Texas in 30-something degrees? Replace bowls of chowder with tacos, and hot ports with vodka and grapefruit juice for one. Then, add a beautiful venue in the form of Arlyn Studios, complete with church pews, a small audience, the Other Voices crew, and a line-up that is about musical quality, real players and a dedication to the art of the tune. There may be no Benners across the road, but there is The Continental Club around the corner.

The weather can still get in the way

The Dingle crew is well used to troubleshooting when snow makes roads impassible, storms hammer the Conor Pass, or flights abort their landings at Farranfore. The warmer climate of Texas causes fewer issues, but with Hurricane Matthew raging on the other side of the country, Band Of Horses cancel their Saturday slot. Plenty of other productions would crumble, but this is a crew well past its 10,000 hours of figuring things out on the hop.

Other Voices in Dingle in December has now expanded beyond the filmed gigs in St James’ Church to include a music trail of free gigs, Banter, and a creative conference called Ireland’s Edge. This has naturally eroded some of the intimacy and calmer vibes. Other Voices Austin feels like an echo of those early Dingle editions, with bands, presenters, and crew hanging out with audience members after the show. Other Voices doesn’t “do” VIP, backstage or velvet ropes, but while the Dingle festival has a tendency in recent years to get a little manic, Austin is relaxed.

Big hitters, no matter where it takes place

One of the Other Voices thrills is seeing massive acts in a small, unique setting. Cue the buzz caused by one of the biggest acts around, Mumford & Sons, landing into Arlyn Studios on Saturday night. Earlier in the week, the crew were in Pedernales Studio to record a session with Willie Nelson.

Other Voices has grown into a unique musical brand that goes beyond “bands in a small room”. Passion and respect for music and song is at its core, bolstered by the knowledge of Philip King and the expertise of producer Aoife Woodlock with her ability to make almost anything happen. Other Voices forges relationships that hone in on the purity of music as art and as a mechanism of gathering and sharing. In the home of SXSW, Austinites are well used to the concept of a secret gig, and you could tell the crowd felt something magical was going on.

The venue is king

Arlyn is a stunning music studio. Andre 3000, Coldplay, Childish Gambino, Willie Nelson and Lorde have all recorded here, and there are serious vibes in the rooms, together with those Other Voices touches (the heart logo has been adapted; the room is a similar size to St James’s Church; there’s an overflow room for extra audience members; and a small, free pop-up bar outside). Because it works, it immediately gets you thinking about where else Other Voices could travel to.

Back to its roots

The music in Austin feels like it’s back at Other Voices’s roots, with a focus on guitar music, inevitable in a city with such a rich history and contemporary chops when it comes to country and folk. While that may not play to those who prefer seeing Sbtrkt or Young Fathers, it certainly works well with the Austin audience.

More of these musical exchanges could really take hold

Colm Mac Con Iomaire and Iarla Ó Lionáird act in some part as musical ambassadors, opening the schedule alongside the Irish-American Massachusetts singer-songwriter Aoife O’Donovan. Ó Lionáird gives a detailed rundown of the provenance of his set. Mac Con Iomaire plays The Finnish Line and Emer’s Dream, two songs that are a thrill to enjoy with a new audience, especially one as vocal with its “wows” as the Texas crowd. With Philip King contextualising the Other Voices venture, and presenters drawn from Texas (Shakey Graves), Ireland (MayKay) and Wales (Huw Stephens), there is a sense of a cultural exchange as well as a collaboration at play. This is the type of thing that cultural agencies talk about and aspire to, yet rarely achieve.

There isn’t really a duff note sung or played all weekend. For me, the two finest sets are from Gregory Porter, whose voice and band are insanely good, and Conor Oberst on Sunday evening. Oberst plays songs from his new album Ruminations, including the stunning Next Of Kin, which channels John Grant and Bob Dylan at their finest.

This is the start of a beautiful friendship

Ireland likes to think of itself as a global music capital, but Austin goes all out and calls itself the live music capital of the world. Can you argue with that? The Other Voices family seems to have found kindred spirits in Austin, people who put music first, middle and last. There’s serious potential here for a long-term collaboration. There is a depth of emotion, experience, passion and belief to the Other Voices project that is not generated overnight, and something that real music people in real music places just get.