Music's hottest stars, including One Direction and Jennifer Lopez show off the latest fashions ahead of the American Music Awards. Video: Reuters 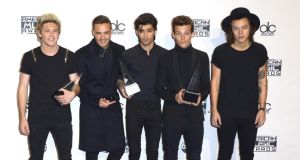 One Direction hold their three awards for Artist of the Year, Favorite Band Duo or Group - Pop/Rock and Favorite Album - Pop/Rock at the 2014 American Music Awards in LA. Photograph: EPA/Paul Buck

The boy bands were clear winners in the top award categories at the 2014 American Music Awards, held in Los Angeles on Sunday.

One Direction led the celebrations with three accolades, bagging the top award of the night for artist of the year, as well as fan-voted awards for favourite album and favourite band, duo or group in the pop/rock genre.

“It’s amazing because we worked so hard on these last two albums,” band member Liam Payne said. The five-piece performed its latest single Night Changes against a night-time forest backdrop.

Katy Perry also won three awards, but touring duty in Australia meant she wasn’t on hand to accept them in person.

The boy bands were well represented on the night as Australian newcomers 5 Seconds of Summer won the coveted new artist of the year award.

“As musicians, we receive so much critique and we really question what we’re doing, but I think this validates that I’m on the right path,” Azalea said.

A sultry Taylor Swift performed Blank Space on stage and was awarded the first-ever Dick Clark Award for Excellence, in memory of the founder of the American Music Awards who died in 2012. She received the award from R&B diva Diana Ross.

“I’m so blown away to have just received an award from Diana Ross, who over the course of her career stood up for herself so many times in a period when it wasn’t popular for women to stand up for themselves,” Swift said.

Much of the three-hour awards show, aired on ABC, was dedicated to performances dominated by the ladies of pop music, including a rendition of Booty by Azalea and Jennifer Lopez.

Garth Brooks was also on hand for a song, performing People Loving People (video above).

Other stars to take to the stage included Ariana Grande, who sang Problem and Break Free with a jazz twist, and Selena Gomez, who performed The Heart Wants What It Wants.

Nicki Minaj and Skylar Grey played their duet Bed of Lies and Minaj, along with Grande and Jessie J, later performed the upbeat collaboration Bang Bang.

Don’t Be Evil: The Case Against Big Tech: Important book on corporate giants
8

Where do love and hope ultimately come from?
Real news has value SUBSCRIBE