On the Record: Where’s all the Irish music on Irish radio? 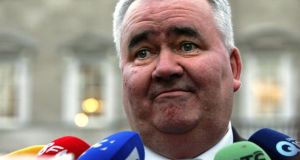 Willie Penrose TD: "Stations such as RTÉ and other commercial stations should have a quota for the amount of Irish music played"

There are some stories and characters which pop up on a regular basis on every reporters’ beat. If you’re working in the sports department, you’ll deal with Brian Cody summer in and summer out. The business desk will always have Dermot Desmond or Denis O’Brien to cover.

Here at On the Record, we also come across perennial stories such as Irish club licensing hours, though we do our level best to avoid them because nothing changes.

But there are times when a story just can’t be avoided. Readers with delicate constitutions may want to turn away now because this involves a TD and Irish radio.

Willie Penrose won’t be the last elected representative to have a go at the lack of Irish music on Irish radio. It’s a favourite for those in the Dáil and Seanad to pick up and throw around occasionally. In the case of the Longford- Westmeath TD, he hit all the usual targets with his recent spiel, including Kylie Minogue, quotas and Rihanna.

The problem, as always, is a lot more complex than it looks at first glance. Irish commercial radio stations play Irish music in that they play the Irish music they know their listeners want to hear. They know this because they have spent a small fortune on focus groups to ascertain likes and dislikes.

Acts not getting plays may argue otherwise, but these are commercial stations and their revenues depend on listenership. If a band helped to increase a station’s reach, they’d be on the playlist quicker than you could say “we need a radio edit ASAP”.

It does sound unfair when you’re on the outside looking in, but that’s the commercial landscape for you. Let’s not forget that the current radio infrastructure was put in place and maintained by various Irish governments, so TDs have only themselves to blame. There are a ton of anomalies in there – such as the token Irish language shows – but they’re rarely mentioned or tackled. Instead, it’s the easy one: Irish music on Irish radio.

A far more useful tack for Penrose or any other Leinster House attention-seeker to take would be to look at some of the bigger issues hindering Irish musicians.

For a start, most are self- employed, so what is the government doing for this sector? Does the government have an arts or culture plan (no laughing at the back, please) which might help?

Yep, you can see why TDs prefer to give the radio stations a dig in the ribs to actually do something real and tangible.

YOU”VE GOT TO HEAR THIS
The best show on Irish radio right now doesn’t usually feature any Irish music at all and that’s okay. Kelly-Ann Byrne’s The Beat Goes On every Saturday night on Today FM is a belter of a show, full to the brim with old-school funk, soul, disco, house and other platinum-coated dancefloor grooves. All thrillers, no fillers.

ETC
Irish music on Irish radio? Step this way. Broadcast on Lyric FM this evening at 7pm, Ozone is the story of The Noel Kelehan Quintet. Aside from his work as RTÉ musical director and orchestra conductor, Kelehan was also an influential jazz pianist back in the day. Peter Curtin’s documentary finds out more about the Dublin underground jazz scene of the 1970s and especially Kelehan’s 1979 album Ozone.

Dr James Barry: the Irishwoman who fooled the British Empire
5

A Beautiful Day in the Neighborhood: A tremendous film, a great young director
10