New artist of the week: Kneecap – Irish rap with a dash of fun

Plus: songs you have to hear from Silverbacks and Laurie Shaw 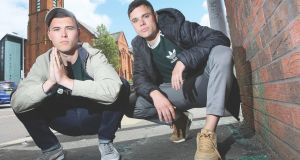 What: Rap as Gaeilge with lashings of humour

Why: It was inevitable that the reach of hip-hop would have an effect on Irish language speakers, such is the dwarfing influence of the genre. It’s music of youth, of urban life, and is rife for comedy, as we’ve seen with Dublin’s ambitious, visually-led rap group Versatile.

Kneecap are the latest in a small batch of rappers as Gaeilge to make a big impression beyond their local scene. Mo Chara and Móglai Bap hail from West Belfast and are clearly in thrall to the golden age of 1990s rap music that itself took inspiration from funk bass, jazz drums and head-nodding production. But, like Versatile, they aren’t afraid to delve into rave rap. There is indubitable high quality to their productions.

The duo’s debut mixtape 3CAG, released earlier this year, has confidence and swagger that embodies young arrogance, and is preoccupied primarily with juvenile matters: getting caught with drugs by the Garda, going out and dealing with bouncers, with references to TG4, Sainsbury’s, the RUC and Bláthnaid Ní Chofaigh.

There’s no nuance in the subject matter here but it must be said that Mo Chara and Móglai Bap are the main draws, thanks to their grasp of turning rap vernacular into Irish and back to English when it suits them, and adaptable flows and rhythms coming easy to their tongues. And their Irish-speaking peers are cheering them on, with sold-out shows in Dublin, and the rest of the country not far behind in the venue sweatbox stakes.

Silverbacks – Just in the Band
Dublin five-piece band Silverbacks are among the Irish bands including Fontaines DC, Just Mustard and The Murder Capital who have got publications such as NME and Stereogum wondering what’s in the water here. Inspired, in both tone and lyrics, by the original New York CBGBs era and the 2015 documentary Danny Says, about The Stooges’ manager Danny Fields, Just in the Band is a raucous throwback walking parallel lines to The Strokes’ early material.

Laurie Shaw – A Racket
The Merseyside-born Cork-based artist Laurie Shaw walks to the beat of his own drum. In 2018 alone, he’s released four fully-produced albums under his own name and a garage-rock side-project called Foolish Mortal. His Bandcamp page says he has released 75 albums in total (!) and he’s only 23. So we’ll start with one song from his fourth album of 2018, Year Zero ,which is like a cross between the psychedelic pop of The Coral with the Arctic Monkeys’ recent lounge-influenced album. A Racket is a fuzz-pop, um, racket of delightful rock’n’roll proportions. Where does he get the time?