Neneh Cherry: ‘There is a very shallow, sexualised entrapment that women get sucked into’

Neneh Cherry has plenty to say, whether about appearing pregnant on Top of the Pops in 1988 or how things have changed for women in music 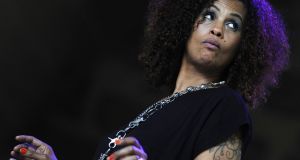 Neneh Cherry: “I still feel so unfinished, in a way, and that can really piss me off sometimes.” Photograph: Rafa Rivas/AFP/Getty Images

‘Hello, darling.” Neneh Cherry answers the phone to you like you’re her best friend. She is just in from the market and is a bit flustered and can I just give her three minutes?

She is coming to Dublin at the end of the month to do a Q&A as part of the MusicTown festival. It was supposed to be with her husband, producer Cameron McVey, who has worked not only with Cherry but also Massive Attack and Portishead. But McVey’s in hospital getting a hip replacement. “He’s in hell right now,” she says, so it will just be her, which is no small thing. Cherry has plenty to say.

Mention Cherry to most women of a certain age and the image that will come to mind is her beautifully badass appearance on Top of the Pops in 1988. Cherry bounced around the stage to her breakthrough hit Buffalo Stance, seven months pregnant in black Lycra, back at a time when pregnancy in Ireland was still a slightly embarrassing, smock-wearing affair.

Cherry’s solo career went quiet after her 1996 album Man, and much was made of her “resurfacing” in 2014 with the well- received Blank Project. “There’s that thing with people if they haven’t seen or heard from you for a while, it’s like a weird, long, big sleep. ‘Why did you disappear?’ ”

There was no great mystery. She was busy with family and “life’s demands . . . My creative drive also comes from the way that I lead my life. So if I wasn’t in my life I don’t know that I’d have stuff to write about.”

After her third album in 1996 and the velvet toughness of tracks such as Woman, Cherry “felt like I kept banging my head against limitations. The environment of the success” was wonderful, she says, a complete surprise, but “the idea behind making Buffalo Stance and Raw Like Sushi wasn’t to be famous, it was to change things and do things the way that we do them, always with an idea of activism or a kind of rebellion”.

A numbers game began to take over, which she found frustrating. “I knew that I wanted to keep being in a place that was more experimental, feeling that I could throw out curve balls and that would be cool. If you’ve signed with the big dudes and put money into your pocket and bank accounts . . . then you’re running up debts and making videos that are costing more. You’re on a tour. It’s a f***ing weird commitment.”

Cherry’s two most recent albums were with the Smalltown Supersound label based in Norway, and the passage of time has brought its own freedom.

“It was like starting over a bit. And I guess where I am age-wise, I care, but I don’t really give a shit. I’m not trying to be or needing to be a new kid on the block or the new trendiest, hippest thing that’s happened.”

The industry has undergone significant changes since Cherry first appeared on the scene. “My youngest daughter, Mabel [McVey], is signed to Polydor. She’s just starting working on an album, but some of the conversations that we’ve had are similar to things that I went through.” The expectations of a major label remain the same: “Record sales and wanting hits.”

But one of the key differences Cherry sees is “the kind of temporary aspect. A lot of who you are and what you are and how well you’re doing is considered by how many people are on your Instagram. And also because of the amazing amount of music that’s being put out, and a lot of good music, there is this kind of continuous turnover.”

Artists no longer have time to develop. “Already since Blank Project, I’ve had discussions with people I’ve worked with that I should have more music out and all of the good work I did with the last album, the momentum’s kind of gone already. I’m like, okay, fine, there’s a momentum, but then there’s also a place where what you’re putting out has to have some value.’

“When I look at some of the artists around me, there’s this pressure to have success before you’re really walking.” Whereas before, “you’d listen to something and think, This is going to be good in, like, two albums.”

What about the enduring legacy of the Top of the Pops appearance? She never imagined its impact. “When me and Judy [Blame, stylist and art director] got dressed to go on TOTP, we were sort of focusing on finding things that were cool that had Lycra in them,” she laughs.

“I sure as hell knew that I wasn’t gonna stand there and wear a weird cloak pretending that something else was happening . . . In a way it became the best thing about that whole journey, other than the music, was the fact that I was carrying Tyson inside of me.”

She was wary of “the overall thing that shadows over being a woman in making music and putting out records. Sexual energy is really strong, it’s everywhere and everything, so I never felt like I wanted to not let those juices flow. But it was definitely a powerful thing, carrying a child and feeling that it became a strong element in the content of what we were doing.”

I ask her if she feels women have made progress in the industry, now that overt sexuality is so prevalent, and perhaps even expected. She’s not sure how to answer.

“Sometimes it’s like, men this and men that, but yeah, there is a stereotypical, very shallow, sexualised entrapment that women get sucked into, and you open up a f***ing Vogue or just general media, and it’s enough to make you want to heave.” But it’s not straightforward. “It’s not like we’re always forced by some guy with a suit; we are also making sometimes very suspect choices.”

She is hopeful when she looks at her daughters. “They are wilful, really amazing, interesting, driven. There’s a phenomenal amount of women that are really on fire. A lot of us are realising that we thought we had come a lot further than we actually had. It’s like, oh shit, we’ve gotta keep our eye on the ball.

“Why don’t more girls want to produce records and why the f*** aren’t there more girls who . . . still now, when I see a woman playing the drums I literally get the horn. Oh my God, it’s so cool. But why do more girls want to be lead singers? We have all those issues of men being paid more than women, facts that are unbelievable. But there is a kind of sisterhood, a place where we’re being reactive and active and that’s really important.”

Cherry and McVey famously bankrolled acts such as Massive Attack when they were just starting out. She mentions Skinny Girl Diet, “a band that we were kind of . . . sponsoring sounds really wack, but working with a bit.” That relationship “didn’t quite work out”, but helping out new bands is “just a really natural part of how we work, because it becomes a two-way relationship. It’s an exchange.”

McVey has “a songwriting skill that, I have to admit, it’s sometimes f***ing irritating because he constantly just spits out these amazing songs”, and the collaboration between them is key to her music. “We have a thing that I value so much, that magic that we have between us, that crazy air pressure is where I work best. I’ll go away and write things on my own but then it’s very much about us coming together and making sense of the songs.”

Cherry has done the festival circuit for the past two summers, with RocketNumberNine, the two musicians she worked with on Blank Project, but now it’s “time to put my head down and get some new music made”.

She won’t be taking another hiatus. “I still feel so unfinished in a way, and that can really piss me off sometimes, but I’m also really thankful. If you let things go for too long, it’s a little bit like you’re starting over. It can be that feeling of going on to the next chapter rather than starting a new book.”