Singer (55),who retired from tour after six weeks on the road, is to play London gigs 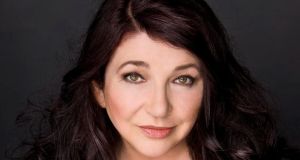 Kate Bush is to return to the stage - 35 years after she retired from touring after just six weeks on the road. Photograph: Trevor Leighton/PA Wire

Singer Kate Bush is to return to the stage, 35 years after she retired from touring after just six weeks on the road.

She will play a 15-date residency at the Hammersmith Apollo in London, which was the venue for a celebrated concert film she made in 1979.

The 55-year-old made a surprise announcement about the shows, to be called Before The Dawn, this morning, with the first taking place on August 26th.

Bush talked about a desire to return to playing live in an interview three years ago, saying she would love to play again before she became “too ancient”.

She was just 20 when she completed The Tour Of Life after topping the charts with Wuthering Heights the previous year.

Over the years, theories about her absence from the stage have included her perfectionism, a fear of flying and the death of one of the tour crew, lighting director Bill Duffield, during a show.

But in a rare interview with Mojo magazine in 2011 to mark her comeback, she explained that her years of silence on the touring circuit were simply down to the sheer exertion of the ordeal.

”It was enormously enjoyable. But physically it was absolutely exhausting,” she said.

”I still don’t give up hope completely that I’ll be able to do some live work, but it’s certainly not in the picture at the moment because I just don’t quite know how that would work with how my life is now.“

For long periods she she has largely withdrawn from public life to bring up her son, Bertie.

Her reappearances have been sporadic. Her 2005 album Aerial was her first release for 12 years, although in recent years her work rate has become a little more prolific with a collection of reworked songs from earlier albums called The Director’s Cut, as well as a themed album of songs about snow.

In her Mojo interview, she went on: ”Maybe I will do some shows some day. I’d like to think so before I get too ancient.“

Tickets for the shows go on sale next Friday.

Shots in the Dark: A portrait of Britain as a struggling team
5

Has Britney Spears really been judged incompetent to vote?
6