The leader of the new school tells about joining the dots between Snoop Dogg and jazz, his on-the-road education – and why music is such a complicated thing 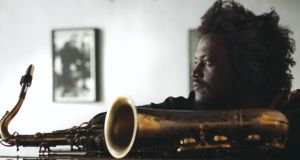 Meet the musician behind the album of 2015 to date. His name is Kamasi Washington and the album is called The Epic. It’s epic by name and by nature, a 172- minute-long record of beauty, imagination and endeavour.

The Epic is the kind of record you won’t meet every day. It’s barnstorming, grandstanding and soaring as the saxophonist pushes his orchestra, choir and band higher with every track. It’s a jazz record in sound, scope and spirit, but imbued with hip-hop, electronic music and jazz played by a wide-eyed bunch of desperados throwing the most mesmerising of shapes.

The road to The Epic begins in the Inglewood section of Los Angeles. That’s where Washington grew up, the son of a professional musician father who played with The Temptations, Diana Ross and others, and a flute-playing science teacher mother.


“When I was a kid, there was always music in the house, but music didn’t stick at first with me,” he says. “I played the drums and then the piano and then the clarinet, and I wasn’t that interested. My older brother was super-duper talented as a kid and everyone thought he was going to be the musician.”

Beyond the house, Inglewood had gangs and violence. There was always a danger that a youngster like Washington could find himself involved. Then, two chance occurrences changed things for the young man.

“My cousin gave me a tape with Art Blakey and Lee Morgan and that’s when I got into jazz,” he says. “I also came across the autobiography of Malcolm X, and it changed my perspective and I suddenly saw a whole other side of this area I grew up in. There was a whole lot of art and music going on in that neighbourhood as well as the gangs. I saw the area in a positive way that I was blind to before.”

Washington knew what he wanted to do. “Once you find your calling, you’re fine. In my neighbourhood, if you really got into sport or music or writing or maths, you were fine. It was the people who were messing around and didn’t have a purpose or a path who ended up getting in gangs and conforming to this negative way of life.”

After school, his real schooling began with a call-up to join Snoop Dogg’s band.

“The first gig I ever did, the first big gig and tour, was with Snoop. I was 18 or 19 and Snoop’s band was hot, full of jazz musicians like Terrace Martin, Isaac Smith, Robert ‘Sput’ Searight from Snarky Puppy, Thundercat.

“I loved Snoop when I was growing up,” he says. “I was into west coast gangsta rap so I was a fan anyway. But it wasn’t my plan to go on the road. I was really into jazz, I was practicing eight hours a day, I was gearing my plans to go more towards jazz. Then Terrace called me and, when you’re a musician, you just want to play music.”

He watched, listened, played and learned.

“Snoop never asked us to play anything that was technically difficult, but he had this super particular way he wanted you to play. It was as if he listened to music through a microscope and I had to pay really close attention to how I played. That affected how I play jazz, because I’m now looking at music through a telescope and a microscope.”

Washington went on to play with Lauryn Hill, Chaka Khan, Stanley Clarke, Mos Def, Kendrick Lamar (you’ll find him all over To Pimp a Butterfly) and Raphael Saadiq.

“Lauryn Hill challenged us because she was super-demanding,” he notes. “She wanted to make her live band like a sample machine. Every day there was a stack of CDs and she’d ask us to learn 20 songs. In a course of a month, I must have learned 150 songs for her.

“It made me learn music really fast, and we had this confidence to grasp things really quickly. You were always learning, you were always pulling something new out.”

When he wasn’t on someone else’s payroll, Washington was playing music with longtime friends such as Miles Mosley, Ronald Bruner, Ryan Porter, Tony Austin, Cameron Graves and Brandon Coleman. The West Coast Get Down would play in Hollywood’s Piano Bar, the Bar Sinister goth club and local churches.

“When we were kids, we’d play music all day and all night and we couldn’t get enough,” he says. “Then we’d get home from being on tour with Snoop and the same night, we’d play in a club and then go back home and play some more. Odd venues and gigs give you the confidence to be who you are and do what you do.”

Washington realised the time had come for the collective to make some musical statements of their own.

“There was so much music we had, but we never had enough time to really give it the treatment we deserved. When Brainfeeder approached me about making a record, I’d already decided to take some time off and record my music the right away and give it respect.

“When I called the other musicians, they’d come to the same conclusion and we knew we’d to take time out to do this. It’s not that we weren’t recording our own music, but it always came in-between working with other people, and we had to make our music the priority.”

In December 2011, the West Coast Get Down gang took over a LA studio for a month and put in 16-hour shifts. Some 190 songs were recorded, with The Epic just the start of things.

One session, many songs

Washington enthuses about the albums to come. “They’re all really good, but they’re so different from one another. People will find it hard to believe they’re all from the same sessions.”

What he hopes that people take from The Epic is a feeling. “We all experience music on the same cosmic level. It gives me a feeling and I can’t really explain why I like it or don’t like it or why it works or doesn’t work.

“There’s even a myth that all musicians know what is going on, and they don’t. People think when I listen to John Coltrane that I know what he is doing, but I don’t. I hear music the same as anyone else – I hear it and it gives me a certain feeling.

“Music communicates on a level that is deeper than the theory behind it,” he says. “All the theory does is help you interpret what’s in your head. You listen to James Brown and you hear that groove and you get it. The beauty of it is in the purity and not the simplicity. It’s beautiful because it’s this precise thing and not because it’s simple. Because it’s not simple.

“That’s what I liked about Snoop. He may be playing just a bunch of notes, but how he is playing it is so complicated when you break it down.

“Music is a complicated thing. It’s also a very human thing and we were built to grasp it.”

The Epic is out now on Brainfeeder. Read Jim Carroll's review here

What does theatre look like streamed directly into your home?
6