An Irishwoman’s Diary: Teaching trad in an untraditional way 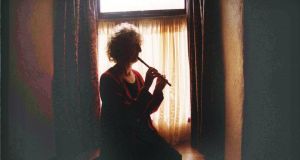 Mary Bergin: One might spend years learning, practising and perfecting techniques, but a tune is not a tune if it doesn’t have a “nyah”, or “neá”. Sense it while listening to a piece many times over, she says, and one can begin to interpret the music’s life, its breath, its soul. Photograph: Bryan O’Brien

‘Nyah” could be “Japanese slang” or a “beautiful woman”, according to some online definitions. The Oxford English Dictionary confines it to a “taunt” or behaving in a “childishly supercilious or derisive manner ”. Mention it to a traditional musician here, like Mary Bergin, and she’ll have a truly magical interpretation. For Bergin, it is fundamental to her art. One might spend years learning, practising and perfecting techniques, but a tune is not a tune if it doesn’t have a “nyah”, or “neá”. Sense it while listening to a piece many times over, she says, and one can begin to interpret the music’s life, its breath, its soul.

Bergin was still at school when she was captivated by the “nyah” of Willie Clancy at an Oireachtas concert in Dublin. In her Shankill home there was no radio and there were no records, but a better “live” substitute. Her father played melodeon and her mother the violin. Visiting musicians left a lasting impression. Her piano teacher was always saying rosaries, so she picked up a Clarke C whistle and never quite put it down.

Decades later, Bergin wears her fame lightly as a TG4 Musician of the Year and one of “the iconic performers in our time”, who has, to quote musician and archivist Jackie Small, “established the tin whistle while firmly at centre stage”. Her two solo recordings, Feadóga Stáin and its successor, are ranked among the most influential albums of Irish music ever, Small says, and her collaborations with groups including Ceoltóirí Laighean, Dé Danann and Dordán have brought her international renown. That’s why spotting the simple double-column notice which appears annually in the local press in Galway can have the same thrill as hearing the rare rasp of corncrake in hay.

Each autumn, Bergin publicises her adult tin-whistle classes, which she runs in tandem with a busy tuition programme in schools. Such is the response that she has no need to run the advertisement a second time. I still have my slightly dog- and cat-eared notebook from a first term, where we started with “Do a deer” and moved on to Na Trí Bláthanna, the Kerry Polka and Peigín Leitir Móir. Each week, we noted down the music, practised together, and then recorded our teacher’s version for study at home.

Traditional music is not played as it is written, she would explain, introducing us to what is now known as the “Bergin notation”. Her patience and enthusiasm were boundless, even with a duffer like me. It was the practice at home with a six-month-old housemate that proved challenging, however. “Virtuoso” renditions were met with roars of disapproval and shrieks of anything but delight. Fearing calls by neighbours to Childline, I tried in vain to use tissue paper as a muffler. It was not to be. Years later, I now have my chance to shine again . . . or, at least, flicker for a little while. The best Christmas present ever comes in the form of a two-volume tutorial and accompanying CDs which Bergin has published with support from the Arts Council. “Learn at your own pace and in your own time,” she says in her introduction, which outlines the step-by-step sequential lessons in all aspects of whistle-playing which she has prepared. The first volume begins with a guide to holding the whistle; fingering; notes; controlling breath pressure; ornamentation; movement and flow. By the time one reaches lesson eight, one may be onto dance tunes and upping the tempo, and raring to go for more in volume two.

Bergin advises that time spent is time well gained. “People often want to jump to dance tunes too quickly, whereas this approach emphasises working on the basic techniques,” she explains. “All those professionals that you see now started off in school marching bands, learning the fundamentals that save on problems later,” she says.

One can learn at any age, she emphasises, recalling very proficient septuagenarians coming to class. The tutorials carry a code entitling you to club membership on her website, where you can pick up additional tips, pointers, and enjoy an opportunity to participate in online group master classes. The two volumes took her four years to put together, and a third volume is in train. They document the “inner architecture” of her artistry, Jackie Small noted when he welcomed their publication at this year’s Willie Clancy school in Clare. Nothing quite like this has been done in Irish music. Come the New Year, come a journey in pursuit of the mystical “nyah”...

Mary Bergin Irish Tin Whistle Tutorial volumes 1 and 2 are available on limited introductory offer of €50 and €60 (full price €60 and €75). Details on www.maryberginwhistle.com