John Lydon: ‘I’m not the world’s most perfect person’

The former Sex Pistol on his London-Irish upbringing, his new memoir, and why there’s no tension between his quest for integrity and accepting a part in a Lloyd Webber musical 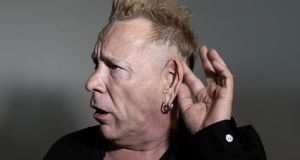 John Lydon: ‘I was raised by my parents to go through the school of hard knocks without self-pity.’ Photograph: Sahlan Hayes/Getty

He could talk the hind legs off a herd of donkeys. Verbose, opinionated, defensive, outspoken, amusing, smart, allergic to humility, a man as eager to play to the gallery as to bow to no one, John Lydon is the owner of one huge ego and an occasionally impressive reputation.

You know the backstory by now, of course, but a concise refresher is no harm: in 1976/77, under the soubriquet of Johnny Rotten, Lydon fronted the Sex Pistols. The band’s debut (and only studio) album, Never Mind the Bollocks, Here’s the Sex Pistols, has never, since 1978, been out of the Best Albums of All Time lists, while their first four singles (Anarchy in the UK, God Save the Queen, Pretty Vacant, Holidays in the Sun) are regarded by some as the best sequential quartet of singles ever released.

Over the years, Lydon has done his best to stick to punk rock’s early principles of integrity and individualism. For some years, however – particularly when seen on television, either being interviewed or during his time on reality-based programmes – there has been a creeping sense of caricature undermining the honesty. For every passionate putdown (“religion is the last gasp of the stupid person”), there is a gurning face; for every strongly held belief (“when I was a child I was determined to think for myself – that was considered a flaw by people in authority”), there is a vowel-curdling retort worthy of Kenneth Williams. Oh, what a carry-on.

Plugging a new autobiography (Anger Is an Energy: My Life Uncensored), Lydon is full of the joys, greeting me in a cod-Irish accent. The book fills in the gaps that his previous autobiography, Rotten: No Irish, No Blacks, No Dogs (Hodder & Stoughton, 1993), left wide open, notably his pre-Sex Pistols days, while also going over old ground with a fully-toothed rake. From the get-go, Lydon wants to forcefully stamp his credentials. The book has a pithy, almost declamatory dedication – “integrity” – a word that has been a credo for him across the decades.

“It’s something I strive towards,” he says. “I’m not the world’s most perfect person – far from it – but it’s a work in progress.”

But there have been times, surely, when he has lacked the kind of integrity he espouses for himself and expects from others? “There probably have been, but none come to mind.” Cue vowel strangulation, stage left. “Isn’t that strange?”

The chapters on his early life in London, as the son of John Christopher Lydon, from Galway, and Eileen Barry, from Carrigrohane, Co Cork, are fascinating glimpses into the formation of a troublesome persona, and Lydon doesn’t necessarily thank his parents for it. “I was raised by my parents to go through the school of hard knocks without self-pity,” he admits. In the book’s opening pages he writes, “I can’t thank my family for giving me a career, because I did that to myself, but I can thank them for standing by me”.

It helps the flow of conversation that Lydon has a refreshingly brusque sense of self, yet when he says things such as “no religion will tolerate opinion”; “collecting money just for the sake of it has never appealed to me”; and “I’ve made my own place by not pretending to be anything other than what I am”, he teeters precariously on a thin line between cliche and truth.

Further doubt arrives when we bring up the topic of Lydon being offered the part of King Herod in Andrew Lloyd Webber and Tim Rice’s Jesus Christ Superstar. He accepted the role, and the production was due to tour North America several months ago but was cancelled only days prior to the start date. “That would have been a terrific challenge,” says Lydon, not altogether convincingly.

I ask what he thinks the 18-year-old John Lydon would say about his 58-year-old self appearing in an Andrew Lloyd Webber musical. “I would have sneered at the idea, but, you know, if somebody had challenged me to do it, I would have done it.”

Really? A trace of annoyance raises its carrot-topped head. “Yes, really. Me tra-la-la-ing in a musical would have been great. I had to leave the Johnny Rotten ego, and everything I thought I knew about performing, at the stage door every morning. Learning dance steps; I’ve always liked to be challenged like that.”

Even within the remit of a Lloyd Webber musical? “I’m very much into taking myself into areas I’m uncomfortable with.” This is said quite defensively. “I’m constantly attacking my ego in that way.”

Some musicians of a certain age lose sight of what inspired them to be great in the first place, don’t they? More defensiveness. “The problem is that many people are surrounded by sycophants, and they grow accustomed to nobody saying no to them.”

Do you surround yourself with people who say no when they need to? “All of my life, starting with my family, and that wasn’t through choice. I have a handful of friends that will not allow me to run away with my big, bad self.”

Lydon talks a sturdy talk, let it be said, but there’s an undeniable swish of whitewashing when I ask what he makes of the U2/Apple business. “I don’t know what to make of it. I don’t know what that’s all about.”

What, then, does he think about Apple giving away the U2 album for nothing, and U2 being part of the company’s $100 million marketing spend? If a telephone line can fume, then it is indeed fuming. “Fine. They can afford it. Well done.” Does he think it’s a compromise too far for U2? Cue a further series of clipped sentences. “I don’t know what it is. I have no idea. I haven’t really thought about it. It doesn’t interest me.”

This is nonsense. Not having an opinion on an issue such as this is one thing, but Lydon claiming that he, a veteran working musician, hasn’t thought about it, and that it doesn’t interest him, is ridiculous. Ever get the feeling you’ve been cheated? Well, perhaps not that, but certainly disheartened that he chooses not to engage with certain topics for no apparent reason.

What does he think he’d have ended up as if he hadn’t gone into music? This answer, at least, is impossible to argue with. “A huge bag of trouble for someone, but mostly myself.”

Anger Is an Energy: My Life Uncensored is published by Simon & Schuster

. . . politicians “I know that most of them are in it for the bump up, which eventually leads to business management, or corporate seating”

. . . Johnny Rotten “The nickname painted a target on my back. I’ve always known that, and no matter how many different items of clothing I go through, or hairstyles, the target remains”

. . . John Lydon “As far as I’m aware, I’ve brought nothing but joy to the wonderful world of anything I’ve ever touched”

My dad the spy: Stewart Copeland on his father’s secret life as a CIA agent
9

Harlots? It’s all pumping buttocks from the men. Which is fair enough
10