Ivan Monighetti: in supreme command of his master’s music

Monighetti demonstrates the best kind of virtuosity, where one marvels not so much at his prowess as at the music 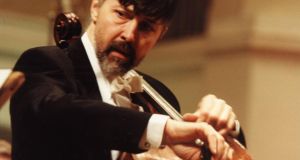 One of the two concerts I attended this week proved to be among the many high points in nearly 50 years of concert-going. The RTÉ National Symphony Orchestra’s programme on Thursday (instead of Friday because of a Valentine’s Day concert) was an all-Russian affair, conducted by Alan Buribayev. The highlight was Shostakovich’s Cello Concerto No 1, with Ivan Monighetti as soloist.

In 2011 Monighetti made a strong impression in performances promoted by the Louth Contemporary Music Society. In that light, and given the fact that he is one of those players who attracts both the highest praise and the most grumpy complaint, I was looking forward to my first experience of his music-making.

This concerto, composed in 1959, was written for Shostakovich’s friend Mstislav Rostropovich, who premiered it in October that year, and whose recording with the Philadelphia Orchestra and Eugene Ormandy tends to define how this piece ought to sound. This concerto’s economy of ideas, its demands on the soloist, its acerbic energy and general tautness, make it a challenge for all the musicians.

Monighetti’s account owes something to Rostropovich’s – hardly surprising given that he was the Russian master’s last pupil. But it also shows many individual touches, especially a more restrained approach to the first movement. It is as if he sees the piece as progressing towards a finale of unrelenting energy – an impression underlined by the extraordinary, subtle momentum of his playing, even in the slow second movement. The intelligence and integrity of his view is gripping, while his virtuosity shows supreme command, and no struggle with the instrument.

Surely, this is the best kind of virtuosity. One marvels not so much at the soloist’s prowess as at the music. This is a performance that stores itself in the memory, filed alongside Barenboim playing Beethoven’s Emperor Concerto in 1966 and, in Dublin, a young Leonidas Kavakos in the Brahms Violin Concerto in 1994, and András Schiff and Friends playing piano trios by Haydn and Beethoven in 2006. All this is helped by a strong contribution from orchestra and conductor – flexible, responsive and unanimous.

Similar strengths are evident in Tchaikovsky’s Hamlet and Rachmaninov’s Symphony No 1. Both works see their composers struggling with form, producing a not-always-satisfactory tension that arises from material that, because it is so contrasted, needs to be presented in a coherent framework. However, in this concert one is barely aware of those issues. The playing is vividly coloured, ideas are strongly characterised, and all is presented with such drive and conviction that the listener is swept along.


Sullivan’s struggles
Tchaikovsky’s and Rachmaninov’s struggles with form are well documented. Less well documented are those of Arthur Sullivan, for his serious works are now almost entirely forgotten, lacking as they do the force that has made even lesser works by those Russian composers endure. Unlike Tchaikovsky, Sullivan did not have the ability to turn a miniature into high art (think of the former’s Nutcracker Suite); but his comic operas show an unerring ability to write music apt for WS Gilbert’s brilliant verse, and a unique flair and wit at parodying the genres and styles of serious opera.

All those qualities are paramount in HMS Pinafore , which began a three-day run at the National Concert Hall last Saturday. It is the second presentation of this Lyric Opera production, which appeared last summer, along with The Mikado , at the Buxton International Festival.

Pinafore was completed in 1878, 10 years before the premier of Tchaikovsky’s Hamlet – although, from the musical style, the date might just as well have been 20 years earlier. It is among the most popular of all Gilbert and Sullivan works – and among the best. Perhaps only Trial by Jury (1875), The Pirates of Penzance (1879) and The Mikado (1885) match its combination of musical and poetical wit, and its flair in deploying absurdities to create what an admiring contemporary critic called “such weird, eccentric yet intensely human beings”.

On Saturday night the four principals – Capt Corcoran (Ben McAteer), Josephine (Emma Walsh), Ralph Rackstraw (Nicholas Ransley) and Sir Joseph Porter (Philip Cox) are vocally and dramatically characterful, and reliable in ensembles as well as in their solos. There are no weak links among the other characters, of whom Dick Deadeye (Graeme Danby) and Buttercup (Valerie Reid) are notably well cast. The authority of Philip Cox as Sir Joseph is especially welcome, for this is perhaps the most difficult role, not so much because of the vocal challenges presented by songs such as When I Was a Lad , as because the singer needs to strike a balance between dignity and silliness.

One of the main strengths of this production lies in that area – in realising that this preposterous tale is far more potent if delivered straight, with no nudge-nudge, wink-wink humour, and with a verve that spills over into farce only at well-chosen moments. Pinafore presents several such possibilities, and the brilliant trio Never Mind the Why and Wherefore is impeccably chosen and staged to be a highlight of that kind.

This is also a musically reliable and enjoyable production. On the night, some parts of Act I sag a bit, partly because the pacing of some of the spoken scenes is too slow, partly because some of conductor Aidan Faughey’s tempi are a bit safe. But Act II is consistently good. In both acts the chorus is pleasing to listen to, even though there were occasional problems with ragged starts. One of the stars of the show is the RTÉ Concert Orchestra, thanks to playing that always sounds stylish and fresh, even with such familiar music.