140,000 Irish music fans can’t be wrong. As Bruce Springsteen limbers up for his five-date Irish tour this month, fanboy Jim Carroll looks at his enduring appeal 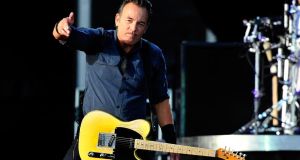 Springsteen and the men and women of The E Street Band will be playing shows in Limerick, Cork, Belfast and Kilkenny, where they’ll end their current European tour with a two-night run in Nowlan Park. Photograph: Matt Kent/Getty Images

Hey, what’s that sound? Can you hear it? There it is again. What is it? Bruuuuuuuuuuuce! That’s the sound of 140,000 music fans yelling – well, yodelling – in delight at the fact that Bruce Springsteen is coming to town again. Over the past decade, a gig by Springsteen with one of his many bands has become an annual must-see for Irish music fans. He comes, he plays his heart out and the audience go away thrilled to bits and feeling a little better about themselves and their lives.

This year, Springsteen and the men and women of The E Street Band will be playing shows in Limerick, Cork, Belfast and Kilkenny, where they’ll end their current European tour with a two-night run in Nowlan Park. In a summer when sold-out shows are far from the norm and big acts are having trouble shifting tickets for their gigs here, the fact that a man who hasn’t had a bona-fide hit in decades has sold 140,000 tickets – and could easily shift tens of thousands more – is quite something

He’s played Belfast before, but it will be his first visits to the other cities on the itinerary. The fact that Springsteen’s hitting new ’hoods freshens things up because it won’t be just another night in Dublin 4 at the RDS, no matter how special they’ve been of late. There are giddy expectations already of what lies ahead in the coming fortnight. Anything could – and probably will – happen on this trip around the highways and byways. Bruce Springsteen is playing in your house, your house. All together now : Bruuuuuuuuuuuce!
Before we go any further, here’s the declaration of interest: I’m one of the faithful. I’m a Springsteen fan of long standing who can bore you to tears talking about how albums such as Nebraska and Darkness On the Edge of Town changed my life. I’m the fan who got the bug listening to The River, dissecting the lyric sheet and having his imagination fired up by what he read.

Even though I’ve developed a loathing in recent years for the open-air shows that now punctuate the summer – Irish fields should really only be used for cows and hurling – I’ll make an exception every time for Springsteen. Because, when all is said and done, there’s no show like a Bruce show.

But even the most hardcore fans will admit to being a little taken aback by the strident fondness for Springsteen exhibited by Irish music fans in recent times. He’s always had a strong bond with his fanbase here, one that has existed since his first Irish appearance at Slane Castle in 1985 on the Born In the USA tour. That was the show that demonstrated that Springsteen was on his way to superstar status in Europe as well as America, the show where the intensity of the crowd as they pushed towards the stage rattled even the singer.

Over the years, he has returned again and again to play here and those bonds have become stronger. There’s even the usual Irish-American link in the news that Springsteen’s people hailed from here. Greg Lewis and Moira Sharkey’s book Land of Hope and Dreams claims that the singer’s great great grandmother headed from Mullingar, Co Westmeath to Freehold, New Jersey back in the 1850s.

But long before we adopted him as one of our own – around the same time as we discovered the Obamas from Moneygall – Springsteen’s Irish shows were always well-attended, even during the post-Born In the USA years, when albums such as Tunnel Of Love and Lucky Touch didn’t really have much appeal beyond the hardcore following.

In recent years, the numbers have gone up and up, especially since the release of The Rising album in 2002. That album ushered in Springsteen’s golden age and the long-time fans were joined a the front of the stage by the curious, the newly devoted and, in recent years, the “event giggers” – music’s equivalent of Roy Keane’s prawn sandwich brigade.

Just as there will always be a fan next to you who has seen Springsteen 20 or 30 times already, there will also be always someone at the show who is seeing him for the very first time. Indeed, the audiences at his shows here and elsewhere have of late got younger and younger, as new generations discover the appeal of that astonishing back catalogue.

It’s certainly not just in Ireland that you’ll find evidence of Bruce-mania. You’ll hear similar tales about Springsteen’s bond with fans in Spain (one of the most frenzied crowd reactions I’ve ever seen at a Springsteen show was in Madrid a few years back), Sweden and Norway (six shows in the past nine months there), not to mention the audiences back in the United States who still flock to the shows.

When Baillie Walsh went looking for fan-footage for his forthcoming Springsteen & I documentary about the connection between singer and audience, he was inundated with clips, photos and stories from all over the world. This Springsteen thing is not limited to one country.

The more you deconstruct the mania and dissect the myths, the more you realise it all comes down to the live show. They’re not making rock’n’roll showmen like Springsteen any more.

He’s the last of the great rock frontmen, the man who delivers tremendous, powerful and entertaining shows every time, events full of raw power, emotional touchstones and fantastic, timeless songs.

There’s no self-consciousness, no attempt to appear hip, nothing studied or artificial. Just a guy and his band who look like they’re having the time of their life on that stage as they romp around for three hours or more, hamming it up for the audience and playing life-affirming tunes until its time to skedaddle.

“My job is to blow into town and tell everybody to keep going and then blow on out again,” is how Springsteen put it a few years ago and he has long stayed true to that vocation.

Musically, Springsteen’s back catalogue has weathered the years remarkably well. While the crowd naturally respond best to the songs from the glory years, Springsteen is a master when it comes to weaving newer material and lesser-known tracks from his 17 albums into sets and making it all gel .

It’s a trick acts such as U2 might want to take a look at. Of late, tracks such as Death to My Hometown and Land Of Hope & Glory from recent albums have assumed the heft, excitement and momentum of the greatest hits around them.

What’s also interesting is how that classic sound of his has come back into vogue in recent years, as newer acts get happy and take their cues from Springsteen. There was always an unspoken whiff of Springsteen from rock’s newer voices, but acts such as Arcade Fire, The Killers and The National are now quick to talk up their fondness for the man and his music. It has given another lease of life to those passionate songs about dreamers in dead-end towns, cars screaming towards the horizon and the other side of the American dream.

Every time Springsteen plays live, there’s something new. On the current European tour, for example, he has been playing the Born to Run, Darkness On the Edge Of Town and Born In the USA albums in full on some dates. While he’s done that before back in the States at the end of the “Working On A Dream” tour in 2009, it’s a new addition to shows over here.

Irish audiences already excited at seeing him in new locations will be hoping for similar surprises over the next few weeks – and hoping they’re there on the nights of those full album shows. It would be awesome, for instance, to hear Darkness . . . in Limerick and Born to Run at the last show in Kilkenny. Here’s hoping.