How Music Works: ‘It’s all about meeting people, taking it in, building an ethos’

In a new column called How Music Works, Niall Byrne talks to those who make a living in the Irish music industry, who shape the musical landscape and who build up the country’s musical reputation, at home and abroad. This week, manager, agent, producer Úna Molloy 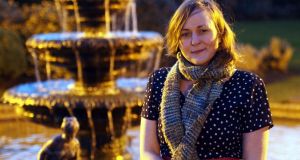 Úna Molloy works as an artist manager, booking agent, tour manager and event producer. She runs the music agency Turning Pirate and is based in Dublin. Photograph: Conor Molloy

Úna Molloy works as an artist manager, booking agent, tour manager and event producer. She runs the music agency Turning Pirate and is based in Dublin. She has worked with artists such as Lisa Hannigan, Booka Brass Band, Jerry Fish, Fionn Regan, Bell X1, Cathy Davey and more.

Long before Molloy had acquired those titles, music was a big part of her family. Her father Jim started the Rathfarnham Concert Band. Along with her eight siblings, Molloy was encouraged to learn an instrument by her parents. She choose guitar and clarinet, but it wasn’t something she wanted to pursue further. “It is great to have some understanding of music and music theory, but honestly the genes skipped over me in the family,” she says, referring to her brother Donagh who plays trumpet with bands such as Ham Sandwich and Interskalactic.

The music bug stayed with her too however. When Molloy went to college in IADT in Dún Laoghaire, she managed the singer-songwriter Rhob Cunningham. She became the Ents officer for the college, but left her course after a year. Working behind the bar in Whelan’s led to the marketing department and the box office. She started booking shows while working in the Dublin venue. Molloy says nearly everything she has learned has been on the job.

Building an ethos
“It has been all about meeting people, taking it in, building an ethos through experiencing the goodwill and good nature of others,” she says.

Perhaps the musician Molloy is mostly closely aligned to is Lisa Hannigan. The pair met when they were around 18 at a party and, a few months later, Hannigan, who had just recorded the soon-to-be mega-selling album O with Damien Rice, rang up Molloy, who had just woken up in a friend’s house in Rathmines, after a party, to ask her to help paint the album cover on a shutter of Whelan’s.

“We agreed that for every four stripes of the shutter we painted we would take a break and have a cup of tea and a shot of tequila, so we spent two or three days just painting, chatting and swapping life stories, and we have been very best friends ever since,” Molloy recalls.

That relationship lead to tour management when Hannigan’s solo career took off, which has taken them to the Europe and the US over the years, including TV performances on The Colbert Report and The Jay Leno Show along the way.

“We have had some amazing experiences on the road and getting to tour manage your best friend and her band is honestly something that I will never take for granted,” Molloy enthuses.

Molloy suggests you should draw the line at meeting your heroes if the opportunity arises while touring. “I got an electric shock from David Byrne in a bar once and I just stood there thinking about everything that came into my head to say - ‘Don’t say that, nope... Don’t say that either... No not that...’ until he eventually smiled and walked off.”

The willingness of others to share their knowledge has been invaluable too with Molloy citing Hannigan’s manager Ben Barrett. “She is just an amazing lady and a total inspiration in terms of how she treats people and how kind she is in an industry that isn’t necessarily a very kind one at all times,” Molloy says.

The openness is an ethos that Molloy has adapted to Turning Pirate, which houses all of her music operations, which has lead to the annual Turning Pirate Mixed Tape gig on New Year’s Eve in Vicar Street which corrals all of her musical acquaintances and their friends for one musical bacchanalia. Recent performers have included Glen Hansard, Gavin Glass, Richie Egan, Camille O’Sullivan, Jerry Fish and Wallis Bird.

“It’s an amazing feeling to be surrounded by people who are really really good at their job, just putting absolutely every ounce of energy they have into doing a show,” explains Molloy. “That feeling of everyone working really hard but also having loads of fun is something to aim for always I think.”

Booka potential
Right now, Molloy is focusing on building the career of the eight-piece Booka Brass Band. They formed in college and started played brass covers of popular hits. They have just released their debut EP of original music and are on tour around the country, culminating in a headline show on March 27th in Vicar Street, Dublin. Molloy saw potential in them right away.

“I had seen them play in a bar and just could really see a path that might work for them,” Molloy remembers.

“A lot of my work is based around the live music industry, booking tours and putting on shows.” Molloy says of her current operations. “Things have changed a lot from the first days of booking shows, as it is harder for venues to make sense of guaranteeing big fees for bands because people are slower to buy tickets and come out these days.”

“There is a very big alternative music scene in Ireland that rarely gets the time it deserves on prime time radio and television.

“There needs to be much more support there for people willing to put the work in. Ireland is full of every different type of musician and I don’t think we nurture all the different genres and ranges enough in mainstream music platforms.”

Molloy’s next venture aims to address that imbalance somewhat. Along with her brother Donagh, they have developed a platform called Turning Pirate Radio, which she describes as “an online version of the music community in Ireland,” featuring radio shows, podcasts, photo diaries and blogs from musicians at home and on the road. It will launch soon.

“There are so many people away from home these days, in a way it should be an opportunity for people to start making waves outside of Ireland through all the Irish people abroad.”

Roesy outlook
In the meantime, Molloy has been working with the musician Roesy on a concept called the The Very Round Robin Tour, which happens in May around Ireland. The concept will feature Declan O’Rourke, Roesy and The Young Folk learning each others songs and performing them ‘in the round’ on stage together and seeing what develops.

“I think it’s an amazing way for artists to support each other, share fans and it’s nice for the audience to see people share a stage in a different way,” says Molloy.

If Molloy was to offer any advice to someone looking to make a living in the music industry, what would she say? “I think the best thing I have learned is to try and make use of every meeting you have, from the old man with the great story at the bar to the backline tech in the other band’s crew or a chance meeting with someone at a party, they all form a great trail when you look back on things.”

As for long term plans beyond booking and producing shows and managing artists? “I would like to move out of Dublin eventually and set up a little music cafe or something that could be a home for all the Turning Pirate experiences and could work along side the work that I already do. I think myself and my partner John would make a serious toasted sandwich business.”