How Music Works: how the Word Up collective is transforming Irish music 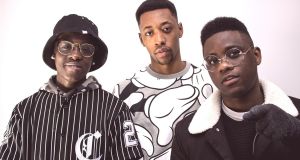 AikJ, Sam Ojo and Damola, three parts of the Word Up Collective

Can you name an Irish R&B musician? An Irish soul singer? An upcoming Irish rap producer? Does Ireland have, for want of a better word, an urban scene?

As the population diversifies, so too does the music made here. In the past few years, the impact of African immigrants is really starting to be felt on the music made in the country, particularly in the genres considered as urban music.

The promising R&B, soul and pop trio Hare Squead have recently signed a major label deal in the UK, Limerick rap trio Rusangano Family just dropped one of the albums of the year in Let The Dead Bury The Dead, Dublin rapper Rejjie Snow has positioned himself as a global act (but one with an Irish accent) and a lot of the promising noise from the independent scene in Ireland is emanating from the Word Up Collective.

Stay Gold, AikJ, Young Phantom, Soulé, Katie Laffan, Damola and Anti-One are some of the artists banding together under the Word Up name. Rap, soul, R&B and pop are their identifying genres and with the experienced industry husband and wife of Phil and Annette Udell are overseeing the collective.

“It started through the amount of quality hip-hop music we were being sent at State,” says Phil, who works as editor-in-chief for the music magazine State Magazine on the origins of Word Up.

“So many of the artists that we’ve spoken to said they felt completely isolated from the industry here.”

“We had Hare Squead play a show for us two years ago. I could see how much talent there is in Ireland, yet most of the time people in the industry would only talk about the same two or three artists. So many of the artists that we’ve spoken to said they felt completely isolated from the industry here. We just wanted to create a platform that could showcase some of these artists and provide a potential bridge to gigs, media, labels etc.”

Create community
As well as helping artists in dealings with the industry, the parallel aim is to create community and a place for the artists to address real issues. Phil talks of the desire to “replace fear with hope through creativity”, while Annette says the collective was formed “because disconnection, isolation and alienation abound and so much can happen when people work together towards one common cause.”

In addition to the burgeoning talent they saw forming, the Udells were inspired to start Word Up by their own teenage children, Ruby and Oliver, and their interest in music.

“They love music, play music and write music but have never expressed a desire to work in it,”says Annette. “We wanted to make sure that we could offer something that could bring back the most positive version of community and a place for kids to feel free to express themselves.”

To that end you can catch 12-year old Oliver DJing at the Electric Picnic at State’s Oxjam Stage again this year.

Back To the Planet
Phil and Annette's lives are enmeshed in the the music business. They first met at a Back To the Planet gig in the Rock Garden in 1993, where Annette recognised Phil from her time working at events in the UK.

“We kept in touch, writing lots and sending mixtapes until one day Phil turned up in Galway, where I was studying at the time, on tour with Maddy Prior and I got invited to join the band on the bus back to England, so I did. I threw a surprise 30th birthday party for him at a friend’s house in Brighton where he asked me to marry him and the rest has been just as fun and exciting as that really.”

Annette worked as an artist manager, agent and booker, Her work took her to UK festivals like Womad and Sidmouth and includes stage and event management for Irish festivals like Festival of World Cultures, the World Fleadh and Electric Picnic and more. More recently, she’s been applying the arts management skills learned at the Creative And Cultural Industries course in DIT with Word Up.

Phil’s career has involved selling T-shirts for a band at college, working at a record store, tour managing and mainly, writing about music for publications such as Hot Press and State Magazine,

Using their experience, the Udells are mentoring the Word Up Collective members through the world of music, advising on release strategies, promoting their singles to media, managing touring, publishing opportunities and producing gigs, including the regular Word Up Collective’s monthly showcases, which give the artists a live outlet (The next one is on in the Bello Bar on May 19th).

“Phil will mainly deal with media and social media whereas I tend to focus on the potential funding and social/community aspect of the collective,” Annette says. “We handle management for Katie Laffan and AikJ so we’re more involved with those two on a daily basis.”

The artists in Word Up each have different styles within the umbrella terms. AikJ is a singer whose music is primarily R&B, Craft Work could be described as agit alt-punk poetry, Katie Laffan released a fine EP of live instrument funk-pop that recalls early Lilly Allen, Staygold are perhaps the most mainstream of the collective (they have a song called Netflix & Chill), while Young Phantom and Dyramid are two artists delving into a darker side of the hip-hop world.

The Word Up artists are collaborating too. Damola, Sam Ojo and MC Ange make up the Back Shed Inc trio while Damola and Katie Laffan have written a song together soon to be recorded. The producer Steven Beatsmith has worked on much of the collective’s music and has even made some music videos for the tracks.

At a recent Word Up Collective gig hosted by MC Anti One, the performances on stage varied in experience, but it was clear that the live events are important for the artists in figuring out where they go next and what to take from each night into the future.

“There are definitely alliances forming that you would hope will develop in musical relationships,” says Phil. “The Word Up live shows are where you’ll find it happening most, every gig seems to end up in a freestyle session with everyone involved.”

Phil and Annette acknowledge that hip-hop, R&B and soul faces the same difficulties that other genres face in terms of financial return and sustainability, but they are hoping the Word Up Collective name will help shine a bolstered spotlight on this new breed of still-developing Irish music,

As we have seen in the UK, where the urban scene is more deeply established in the music culture and flourishing through grime, rap, R&B and pop music through acts like Skepta, Stormzy, Krept and Konan, Ella Eyre, Little Simz, Novelist and Rudimental, Irish artists like Word Up Collective could find a greater acceptance on radio and in the charts, both at home and abroad.

“These artists are making music that sits perfectly with what’s happening in the mainstream so there’s definite potential. In the meantime, we want to develop an education and community strand that will offer other opportunities - both to the established acts and the next generation.”

The stories of Irish deportees from the US in 1800s
7

The Chicks: ‘We were accepted because we made them a lot of money, but they didn’t like us’
Real news has value SUBSCRIBE