‘How can we make opera relevant to our times, make it more than pure entertainment?’

Stéphane Lissner, the director of the French national opera, is going all out to recruit new opera-lovers 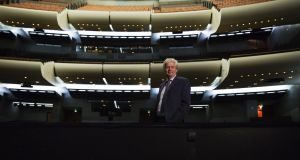 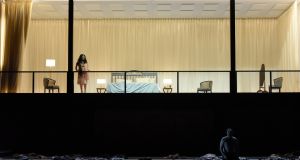 It is the preview of Samson et Dalila, Camille Saint-Saëns’s late-19th-century orientalist opera, at the Opéra Bastille, in Paris. The people of Israel gather on a public square in Gaza, wearing drab blue-and-grey clothing reminiscent of the 1930s and 1940s. One thinks of the Holocaust. Thuggish Philistine leaders grope Jewish women and pull their clothes off, a reminder of Serbian rape camps in Bosnia. Black-clad Philistine policemen open fire on the crowd, as jihadis did in the Bataclan music hall in the French capital. The bodies scattered across the stage conjure up painful memories of the Promenade des Anglais, in Nice, on the night of July 14th.

Samson, sung by the Latvian tenor Aleksandrs Antonenko, urges his coreligionists, “Israel, break your fetters! People, rise up! Come and assuage your hatred! The Lord is within me!”

Never mind the dramatic reversal of the balance of power between Israel and the Palestinian descendants of the Philistines in recent decades. Religious warfare, revenge and betrayal are timeless themes. The young Italian director Damiano Michieletto “clearly proposes images linked to the world we live in”, says Stéphane Lissner, who as director of the Opéra National de Paris has overseen this coproduction with the Metropolitan Opera, which will be performed in New York in 2018.

“How can we make opera relevant to our times, make it more than pure entertainment? That’s what interests me most,” Lissner says. “Obviously, an opera like [Donizetti’s] L’Elisir d’Amore is pure entertainment. But others can be presented not as historical reconstitution but in an attempt to understand the world we live in.”

A prime example, Lissner says, was his choice last season of Arnold Schoenberg’s Moses und Aron. “There are 60 million refugees in the world right now,” Lissner says. “So exodus is a contemporary theme. Romeo Castellucci directed it as if it were happening today.”

Latchimy has accompanied a group of 11- to 14 year-olds from the Collège Sonia Delaunay, in Paris’s working-class 19th district. Their presence is part of Lissner’s Avant-premières Jeunes, or Youth Previews, programme, whose goal is to attract young people to opera. The 2,700-seat Bastille opera house is filled to capacity. In theory, Lissner tells us, we are too old to be here. The evening is reserved for under-28s.

Lissner brought the youth evenings when he moved from La Scala, in Milan, which he headed for a decade, to France’s national opera in 2014. There are 13 youth previews this season. The 1,700 tickets sold online for €10 each are snapped up within 20 minutes. The other 1,000 seats are given to schools and associations in underprivileged areas.

Sixty percent of the under-28-year-olds have never attended an opera before. “It’s great to see an opera with 2,700 young people who are not blase, who are discovering something that is new to them,” Lissner says. “These are my favourite evenings.”

In the audience it is easy to distinguish between the mostly white, middle-class youths who purchased their tickets online and the more ethnically mixed, younger school groups.

Latchimy prepared her students by playing the British rock band Muse’s version of the opera’s famous Mon Coeur S’Ouvre à Ta Voix for them and by writing a blog with the children about what they expected from the evening.

At the Opéra Bastille the children hear the same aria sung by the Georgian soprano Anita Rachvelishvili, a rising star whom Le Figaro describes as having “an incredibly sensual timbre, opulent, with a tessitura as long as it is wide, and a real contralto, plumbing the depths of passion with which Saint-Saëns gifted this femme fatale”.

“They’re glued to their seats, following it closely,” Latchimy says of her students. “I’m not sure how they relate to the music, but the story has them hooked.”

Angie, one of Latchimy’s students, tells me that she found the love scene in Dalila’s bedroom “a little strange” but immensely enjoyed the betrayal scene, when Samson, stricken with desire, reveals the source of his strength. Does she understand the meaning of betrayal, I ask the 11-year-old. “It’s when you give someone your confidence and they don’t deserve it,” she says.

“The idea is to go looking for people who would never go to the opera, by showing them films related, even vaguely, to what we do,” Lissner says. “There are films by rappers, hip-hop dancers, cartoonists, photographers, actors . . . If I deliver a lecture on Faust young people won’t attend. But if I make a film on the theme of Faust, with performers they recognise, they discover the myth of Faust and maybe they’ll want to come and hear Faust by Gounod.”

“Le Spectacle – the theatrical show – has overtaken the music in importance,” Lissner says with a tinge of regret. “Audiences who have seen [Verdi’s] La Traviata will not come to hear a new Violetta, a new Alfredo Germont, no matter how wonderful they are . . . The public now say, ‘I’ve seen La Traviata. Not, ‘I heard La Traviata.’ ”

Extensive use of video has reduced the role of painted backdrops and sculpture. Lissner nonetheless founded an academy to preserve more than 120 métiers d’art, or artistic trades – including carpentry, sculpture, sewing, and shoe-, wig- and hatmaking – mastered by the French national opera, which will celebrate its 350th anniversary in 2019.

As Lissner notes, ballet rather than lyric opera has been the continuous thread in France since the Italian-born French composer Jean-Baptiste Lully created court ballets for King Louis XIV. The Opéra National de Paris “is the biggest producer of ballet-opera in the world” and the only opera with two theatres, Lissner says.

This season 1,050,000 tickets will be sold for 412 performances in Paris, including 197 operas and 173 ballets. (The rest are concerts.) Despite a general anxiety about jihadist attacks, Lissner says, 93.7 per cent of seats are filled. It comes with a hefty price tag. “To make an opera you need 105 musicians, a choir of about 100 . . . Opera costs far more than concerts,” Lissner says. “We have to earn money. I would make ticket prices lower if I could.” The best seats for this season’s 20 operas and 13 ballets cost as much as €252. Fifty-five per cent of the Paris Opera’s 2016 budget, of €211 million, is generated by the opera itself; 45 per cent comes from state subsidies. It will lose €2.5 million this year, because of protest strikes against the reform of the French labour code, Le Monde reported.

In Michieletto’s version of Saint-Saëns’s opera Samson emasculates himself by cutting his own hair. Dalila shows remorse for betraying her lover, throwing petrol on the Philistines’ temple before it collapses in a blinding explosion.

The youth audience didn’t care about liberties taken with the original. All 2,700 rose in a standing ovation, chanting, “Magnifique! Magnifique!”

10 My life with the bin Ladens