Getting it in The Necks: the finer details of music 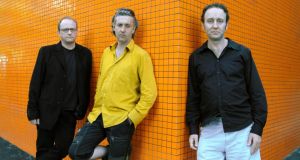 The Necks are, from left, Chris Abrahams, Tony Buck and Lloyd Swanton

Of the many things cult Australian piano trio The Necks can be accused of, “easy to describe” isn’t one of them. In desperation, most critics break out in a rash of hyphenation: ambient-trance jazz; minimalist-jam jazz; post-rock-trance-minimalist jazz; take your pick. The one constant seems to be the word “jazz”. Which, it turns out, is the one word that the band’s drummer takes issue with.

“The Necks actually came out of a dissatisfaction with playing jazz,” says Tony Buck on a video call from his apartment in Berlin. “We were playing in lots of bands, you know, sort of post-Coltrane kind of ways of playing, and I think we were interested in aspects of music, and of our instruments in particular, that weren’t being addressed in that music at all.

“Part of it was this idea of being a rhythm section, where you go round and round the track while a saxophone player exercises his, er, imagination – if I can call it that – for 20 minutes. That macho kind of expression wasn’t really addressing things that we were interested in as individuals. Some people just want to use music to be impressive. They’re like, ‘Hear me celebrate my power’. I think we wanted to let the music speak, and to get into the fine details that pass by very quickly in a lot of music.”

And so, one day in 1986, three friends – pianist Chris Abrahams, bassist Lloyd Swanton and Buck with his drum set – got together in a storeroom in Sydney University’s music department, determined to come at music from a different direction.

“The band was sort of born fully formed,” says Buck. “We were just playing for each other, and for the music, as if the music was this entity we were trying to serve. We really had no intention of playing it in public. We just played in a way where we let the music take its time. We let it be, until it seemed to suggest its own change and that was it. In some senses, we could play a piece today that could very much bear a resemblance to that first piece.”

Fast-forward nearly three decades and The Necks are an international underground phenomenon, with fans including Brian Eno and John Zorn. Each member of the trio is busy with their own projects. Swanton, as well as regular side-man gigs with other bands, composes music for film and hosts his own genre-bashing radio show, Mixed Marriages, on Sydney’s Eastside Radio. Abrahams has released a string of experimental solo albums, mixing traditional piano with electronics and post-industrial noise, including last year’s Memory Night. And Buck has collaborated with everyone from Zorn to Dutch post-punk group The EX, and has branched out into guitar and video art. But when The Necks reconvene for one of their regular tours, they once again launch themselves into the unknown, still serving that spirit of their first rehearsal.

There must be some kind of intense preparation backstage before each concert. One imagines them all deep in contemplative silence, joss sticks a-smoulder, summoning their inner music.

“No,” says Buck, laughing at the idea. “There’s nothing. Some people seem to think that we go through some meditation ritual or something, but if they came backstage with us, they would be very disappointed. It’s all very mundane. In a way, the more everyday it is before we start playing, the more special it is when we get on stage. If we had a ritual, that would be focusing on us, and really what we are trying to do is focus on the music.

“We don’t really talk about the music. Somebody just starts, and if it’s not you, you clear your head of whatever idea you might have had because it might not be relevant to what that other guy has done. So you formulate a response to that and . . . then we let the decision we’ve made sit there for a while until the nature of that idea has revealed itself.”

Whatever it is, it works. Twenty-eight years and 17 albums later, The Necks continue to provoke a strong response in audiences. And Buck is sanguine about the ones who don’t get it.

“Around the five-minute mark, with uninitiated audiences, you get the sort of fidgety sense in the room, and yeah, I guess some people walk out. But then, around the 10-minute mark, you can almost hear the penny drop and people settle down. I mean, if they’re agitated and they want to be entertained, its probably not that great an experience, but if you last five minutes at a Necks concert, you’re there for the hour.

“In this world, with everything being condensed into soundbites, it’s like we set aside this time for us to be with the music. It’s sort of reassuring – it’s reminding us why we played music in the first place.”

Keanu Reeves: ‘Grief and loss are things that don’t ever go away’
4 Miracle warnings and a lack of bull
5