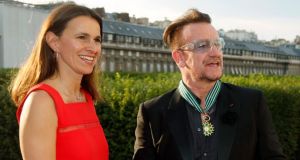 U2 singer Bono with French culture minister Aurelie Filippetti after he was made a Commander of the Order of Arts and Letters in Paris yesterday. Photograph: Reuters/Charles Platiau

Before she hung the green silk ribbon with the gold medal around Bono’s neck last night the French culture minister Aurélie Filipetti recounted his life: Protestant mother, Catholic father. Abhorrence of bloodshed during the Troubles. Scourge of apartheid, south American juntas and the martyrdom of Sarajevo. Fight against Aids, third world debt and poverty — which he recently discussed with President Francois Hollande and Bill Gates.

Beyond notes and beyond words, you committed yourself and dedicated your fame and career to some of the greatest wars of our time,” Filippetti continued. “Not for charity’s sake, but in the name of justice.”

Filippetti lifted the medal from a crimson cushion and held it poised. “In the name of an entire nation, won over by your immense talent... Cher Bono, ... we make you a commandeur de l’ordre des arts et des lettres.”

Commander Bono grazed the hand of the tall, slender, suntanned minister with a baise-main à la francaise. The camera flashes crackled, their light bouncing off gilded mirrors and crystal chandeliers.

Bono was made a chevalier de la Légion d’Honneur by President Chirac years ago. The French still love him. Last month, he and U2 sided with Paris in the inter-European dispute over keeping cultural property out of transatlantic trade negotiations. French officials say their support was crucial.

Bono brought Irish familiarity to the opulence of the French palace, repeatedly mentioning his wife Ali, U2’s manager Paul McGuinness, his fellow musketeers, Edge, Larry and Adam, his friend Guggi, who gave him the name of a hearing aid shop when they were teenagers. U2 bassist Adam Clayton and Guggi attended the ceremony.

“”I woke up with Sam Beckett on my mind,” Bono said. “He was my hero, and he lived across the river.” Though they had little in common, he and Beckett were both Irish Francophiles, raised in the Church of Ireland, with a penchant for rugby, chess, the grape and the grain. “He wrote about the absurd; I am absurd... He wrote about misery. I can be a miserable bastard.”

Through all the talk about la République francaise, Bono was thinking “of another great Republic... a beacon of democracy, the land of the brave: Ireland!... You have liberté, égalité, fraternité; we have ‘arse, girls, and drink,‘” he said, quoting Father Ted.

Bono attacked the old cliché he’d just repeated, praising the “astonishing talent” of friends who were present: “Ireland’s first family of fashion, John, Odette and Simone Rocha” and “Glen Hansard, one of the greatest songwriters on the planet.”

Commander is the highest rank in the order created by the writer and culture minister André Malraux in 1957. Earlier recipients include T.S. Eliot, Bob Dylan, Clint Eastwood, David Bowie and Václav Havel. Séamus Heaney is the only other Irishman to have been made a commander. Neil Jordan and Van Morrison received the lesser rank of officer in 1996.