Folk music is to people what pollen is to the bee 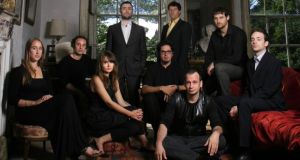 At a time when broad swathes of the world are focusing ever inward, music has a funny way of coaxing our gaze outward again. Yurodny embody that outward gaze in every note of their repertoire, and this month, they celebrate their 10th anniversary with the premiere of a new suite, Wave, composed by founder, Nick Roth. Theirs is a coalescing of traditional and contemporary music in shapes that both reassure and challenge the listener, with their rich synthesis of wildly celebratory music and epic songs of loss and longing. The band’s name choice mirrors their modus vivendi, as Nick Roth explains.

“I came across the word Yurodny in a book called Testimony, the alleged autobiography of Dmitri Shostakovich, ” Roth recounts. “It was highly critical of the Soviet Union and of oppressive regimes everywhere. I think in Russian, it’s actually ‘Yurodivy Krista Rasi’, which means ‘A Fool For The Sake of Christ’. There’s a long history of yurodivy in Russia. Prior to the 20th century every village and town in Russia had its own yurodivy, who was a little bit like a jester. Somebody who’s crazy, but at the same time, the one who speaks the truth. It’s the fool in Hamlet. And because Russia was this enormous country ruled by an iron fist, the yurodivy were a kind of safety valve: because nobody could say the truth, they needed this yurodivy. The yurodivy were outsiders, and had quite a strong link with shamanic traditions from Siberia. Almost feral people. Rasputin was the yurodivy to Tsar Nicholas.”

Roth was deeply attracted to the idea of being able to speak the truth through the insanity of music, and also through the mathematical structural beauty of music. As a widely travelled musician and composer, whose family roots are in Ukraine, Roth was alive to the rich complexity of folk music: which can sometimes be underestimated by those who favour their music washed, ironed and starched by the conventions of classical music.

“In 2006, I was studying in Hungary and I was able to hear recordings made by Béla Bartok of folk singers in the 1920s and 30s along with the actual transcriptions they made while collecting,” Roth recalls. “The music was microtonal, and every ornament in the voice was notated with complex tuning systems. Bartok was very influenced by ideas which stretch all the way back to the Greeks and Pythagoras, and this idea that there’s a natural mathematical order in nature. That’s something you can see in the Fibonacci sequence in sunflowers, for example, but Bartok was inspired by the idea that folk music was the human expression of the natural in the same way that the blossom is the natural expression of the flower, or the pollen is the natural expression of the bee.”

Roth’s vision for Yurodny was one where all its members would share a deep connection with (oral) traditional music, but also with contemporary music, which is a more rigid form.

“There’s also a horizontal and vertical aspect to this,” Roth explains, with the passion of someone who lives and breathes his music, “in that traditional music is horizontal, with its linear melodies whereas formal music is more vertical and it’s all about harmonic structures. So I was looking for three-dimensional musicians, really.”

Having assembled his band, which includes Francesco Turrisi on keyboards, Oleg Ponomarev on fiddle, Kate Ellis on cello and Cora Venus Lunny on violin, Roth likened this gathering to a blank canvas or a block of clay, with the projects they embarked upon attempts to model the clay or colour the canvas.

In the intervening years, Yurodny have travelled widely and released four intensely original and engaging albums, collaborating along the way with musicians from countless points across Europe and the Near East. Fittingly, Roth’s latest composition, Wave, emerged during his period as Dún Laoghaire Artist in Residence at the Lexicon this year. It’s the third suite in a triptych, the first two of which were Wake and Wend.

The theme of movement of people is at the heart of Wave, so it is rich in both local and global resonances. Dún Laoghaire, a harbour town, is a fitting setting for new music composed by a musician whose every fibre seems to seek out connection between people and places. Even the suite’s title has multiple layers of meaning.

“It’s wave, as in crossing the seas to leave, and wave as in goodbye,” Nick elaborates, noting pithily that Ireland is now a multi-cultural society, and those waves are not just water, but of people too. Music is key to uniting us in our commonalities, he insists.

“Yurodny came together at the time when Europe was a much more stable entity. In the last two years, that’s all changed. Everything is in flux,” Roth remarks. “Those ideals that we represent in the music are much more important now. You can listen to traditional music from all over the world and you will recognise elements within it. Music is always more similar than different. Every single culture has music, and music is a very strong reminder that those borders are imaginary and porous. This is music of the people. It’s immaterial where they were born, or where they inhabit. It’s their music. It’s the world’s sound. I think that’s a very profound and important realisation.”