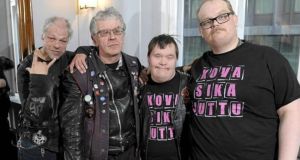 PKN are hoping to be the Finnish entry at the Eurovision: “We don’t want people to vote for us to feel sorry for us, we are not that different from everybody else – just normal guys with a mental handicap”

After a transgender diva and a bearded drag act, a group of middle-aged punk rockers with learning disabilities could be the next performers to challenge prejudice at the Eurovision song contest.

They are far from the kitsch and camp of Dana International or Conchita Wurst, who became heroes for Europe’s lesbian, gay, bisexual and transgender community after Eurovision victories in 1998 and 2014.

But Finland’s PKN are aiming to raise awareness of people with learning disabilities – and “have a fucking good time” along the way, the band say.

Opinion polls and bookmakers predict the band will be runaway winners on Saturday when television viewers select Finland’s entry to the Eurovision finals in Vienna in May.

“If Finland wasn’t ready before for a punk Eurovision entry, they are now,” said Sami Helle, the band’s bass player.

PKN, short for Pertti Kurikan Nimipäivät (Pertti Kurikka’s Nameday), comprises four men with an average age over 40. Their explosive Eurovision entry, Always I Have To, is about having to do things you don’t enjoy , such as washing up or eating properly.

Barely 90 seconds long, it has an anthemic quality and its refrain, “aina mun pitää”, is much easier to sing along with than the double umlaut may suggest.

The song’s success has horrified Eurovision purists. Wiwibloggs, a website devoted to everything Eurovision, gave it one out of 10. “This is not music. It’s noise with a good backstory,” wrote one reviewer.

“PKN’s victory [on Saturday night] is likely, but not the only option – they have their supporters, who are very loud in social media and internet polls, but it’s not clear if they will really vote for the band,” said Sami Luukela of wiwibloggs.

If Finns vote it through on Saturday, PKN will be the first punk entry to the Eurovision contest.

But Finland has a history of breaking the Eurovision mould – Lordi, Eurovision’s first heavy metal glam-rock monster band, gave the country its only victory in the contest in 2006 with Hard Rock Hallelujah.

Before that Finland was a country of devoted Eurovision losers, a proud tradition it reverted to in 2009 with yet another last place finish – its ninth in the contest’s history.

The band offer no concessions to Eurovision norms of style and dress, making no changes in how they look or what they wear. “It’s punk rock – the same style that we have always been, we’re not going to change for nobody, just be our own selves,” Helle said.

“We are rebelling against society in different ways, but we are not political,” he added. “We are changing attitudes somewhat, a lot of people are coming to our gigs and we have a lot of fans. We don’t want people to vote for us to feel sorry for us, we are not that different from everybody else – just normal guys with a mental handicap.”

PKN came together in 2009 around the guitarist Pertti Kurikka in the formerly working-class district of in Kallio, northern Helsinki. A song of the same name became their first hit with ringing power chords over a poignant lyric: “I don’t want to live in an institution, I want to live in Kallio ... I miss the respect, equality of life.”

Since then the band – whose other members are Kari Aalto (vocals) and Toni Välitalon (drums) – have released five EPs and an album, and have toured outside Scandinavia including to the US, UK, Canada, Germany and the Netherlands.

All the band’s songs are in Finnish. PKN’s rise was the subject of an award-winning 2012 documentary, The Punk Syndrome(Kovasikajuttu), billed as a story of rebellion against the mainstream by people with disabilities.

The lyrics to the group’s music range from the mundane – “I had a coffee and took a dump” – to rage at their experience of discrimination, such as the song Puhevika: “I must eat pig food in the nuthouse, I keep my mouth shut or they will stab me ...”

PKN’s ability to sing and talk about their daily lives in this way makes them a political band “whether they like it or not”, the Finnish Musical Quarterly has noted.