Like a sad uncle at a Christmas party, Robbie Williams and his ghosts of pop-dreams past offer a disturbing glimpse of the future 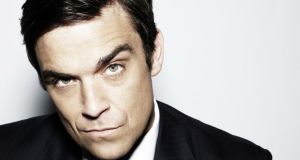 It’s a scary time to be a pop star. Gone are the days of Smash Hits lyric sheets, boob signings, TFI Friday larks and MTV-premiering videos. Today the kids and their internet can make and break a star in a week. From Gaga love to Gaga hate in the time it takes to stream a track.

If anyone was equipped for this cultural shift surely it was the clown prince of pop, Robbie Williams. So what went wrong with Robbie? It’s a question that’s plagued those who have witnessed his recent performances, his turn at this year’s Brit Awards being the most peculiar – a horror show in which the once cartoonish egomaniac stumbled around in his portly car salesman uniform of polo-neck and waistcoat. With his haunted presence and glazed expression – like a sad uncle at a Christmas party – the ghost of pop-dreams past created a disturbing glimpse of the future for the young audience.

The years have not been kind and 2013 finds Robbie uncomfortable in his own skin. His former Artful Dodger persona now appears to weigh heavy on those slack, tattooed shoulders. It seems he has all but handed over his dubious crown to trilby-wearing irritant Olly Murs, going so far as to invite the teatime telly favourite on his latest tour as if formally relinquishing his audience to the youthful successor.

Pity poor, aging Mr Williams, all puffed up and ready to go after arrogantly describing the lifeline offered to him in the form of Take That’s Progress tour as a “busman’s holiday”. Perhaps, buoyed by this successful trip down memory lane, Robbie anticipated an equally warm reception for his first solo album in three years, the ever-so subtly titled Take the Crown. Instead of being greeted with a ticker tape parade from thankful execs applauding his return to save the industry, however, it looks like Rob was treated to a target-market meltdown – after all, it’s now the ladies who bring home the shiny pop bacon.

The industry now demands that Robbie fulfil the role of elder statesman. Nothing illustrates this desperate ushering of Williams into his pipe and slippers better than BBC Radio One’s decision to chuck him off their airplay ‘A’ list, apparently fearing that the almost-40 Robbie might scare off their key demographic of 15-22 year olds.

Unlike his boyband nemesis, Gary Barlow, who managed to re-create Take That as an alluring, M&S-clad man-band for squealing hen parties worldwide – it’s been a reverse fairy tale for Robbie. Whereas Take That 2.0 built on the nostalgia by adding new, sophisticated tunes, Robbie never seems to have fully recovered the reins of the zeitgeist.

Having ruled those myopic millennium days with his crowd-pleasing, cliche-ridden nursery- rhyme fodder, he was then savaged for his 2006 Rudebox album. With his bid at artistic development rejected by generation Beckham, he became despondent, bored and adrift in an industry he had once dominated.

Rudebox’s drubbing pushed Robbie into autopilot blandness on 2009’s Reality Killed the Video Star and then onto an endless treadmill of soulless second-guessing, culminating in a once-unthinkable partnership with former frenemy Barlow on this transparent career “reboot”. Alas, Take the Crown is not the defiant, hit-jammed classic it was purported to be. The bloated pomp of omnipresent single Candy aside, the album has been a muted affair; the seconE-Xd single, Different, dissolved into nothingness.

Now Robbie embraces a future that retreats to the past with his decision to release a second “lounge” album, Swings Both Ways. This is an ominous choice in the world of pop, the last refuge of the desperate; a sign that true originality has vacated or was forced to leave the building.

The crown has slipped. Next time it might not be there for the re-taking.

Gawping at other Irish people’s houses. It’s who we are
5

The Invisible Man review: Tenser than Christmas at the in-laws’
10

Bad sex in the movies: from Top Gun to Fifty Shades
Real news has value SUBSCRIBE