Staging an experimental music fest in an island setting lets fans switch off and plug into a slower speed of life, says organiser Chris Chapman 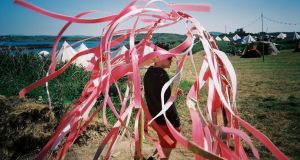 If music festivals in the 21st century serve as societal escapism, a music festival on a faraway island can enhance that feeling through its distance, space and time from daily life.

For every Fyre Festival aimed at affluent influencer-baited lifestyle accumulators, there are dozens of small island festivals run for the right reasons and offering something escapist based in a natural environment and isolation. Ireland has nearly 600 islands off its coast, and the larger ones like Valentia, Aran, Rathlin, Clare Island and Arranmore are among the islands which recently hosted music festivals. Making the effort and going the distance has its rewards.

Joining that list is Sherkin Island off the coast of Cork. With its official population of 106 as per the 2006 Census, and as one of the most southerly points off the island, Sherkin is an ideal place for music on the fringe, as the Open Ear festival organiser Chris Chapman established with the first edition of the festival on the island last year. Open Ear focused on music “that is left and right of the mainstream”, which has generally included electronic, experimental and niche music sensibilities.

Chapman says the isolation of the island allows people to disconnect. “There is a unique beauty to the island, the landscapes, the way the festival site looks out onto the sea, facing away from the mainland towards other islands in the area, which is rather special.”

The idea for Open Ear started when Chapman and his friends were camping on the island. Rain ushered a failure to cook a leg of lamb, and, soaked, the friends checked in to the nearby North Shore Island Accommodation.

The next morning, they talked to the owners Kathy and Mike, and an idea developed for a festival of “experimental, ambient, electronica, neo-classical, hip hop/beats, techno, noise and more”, as the first edition put it. Kathy and Mike agreed to host it on their land.

“They have the warmest personalities of anyone you’ll meet and I think this rubs off on everyone at the festival, setting the tone,” says Chapman of the accommodating couple.

Open Ear sees itself as continuing the lineage of alternative electronic festivals like Leechrum and Dublin Electronic Arts Festival (DEAF) and takes inspiration from Unsound, the Krakow avant-garde festival that has made waves in the music press in recent years for its carefully curated music programme, which doesn’t allow for clashes.

“Obviously we are doing things on a much smaller scale, but our ‘One stage, One audience’ policy is inspired by Unsound. At Open Ear, the audience have the opportunity to engage with every performance, even though we use two different venues, the main stage on the site and, on the Sunday afternoon, the Jolly Roger pub.”

The line-up for this year’s edition features a wider range of music on the edge. It includes the first performance in seven years from Dublin electronic duo Ambulance, synth wave artist Magic Pockets, DJ and turntablist Paudi Ahern, abstract artist Dreamcycles, ambient techno producer Eomac, solo pianist JP Harnett, and rough-house lo-fi music from The Cyclist among many others. The range of music is wider than its first edition, and all the performers are Irish. Chapman says this is a festival policy and he didn’t want the Irish performers to be an “afterthought”.

“Many festivals in Ireland – and this is in no way a criticism, it’s just how things are at the moment – rely on international artists to be the main pull, but we want it to be about the Irish artists.

“When inviting artists to play at the festival we ask them to stay for the whole weekend. We put them up and feed and water them for the whole three days. We want to create a little community on the island for both the performer and the punters, all-inclusive but also that this community we create isn’t in isolation from the rest of the island and its population.”

With 500 people expected to make the trip to Sherkin for Open Ear, a good relationship with the locals is key to keeping everyone happy. The organisers work with local businesses, the island development officer and the committee to build trust that their event would be respectful of the island. Last year’s event was received positively by the locals, so Open Ear are looking to expand that relationship by highlighting the history, ecology and biodiversity of the island through tours. Chapman says that the islanders’ way of life and attitude is a reminder of what many metropolis dwellers lack.

“The things that we worry about in our urban lives, it’s just of no concern to them and that’s very refreshing. There is so much clutter living in the city, when you reach an island it releases a lot of that tension.”

The Volunteer by Jack Fairweather: the hero who first exposed the Holocaust
9

Seamus Heaney on writing ‘Postscript’: a ‘sidelong glimpse of something flying past’
Real news has value SUBSCRIBE