DJ Shadow: ‘I try to buy a 12-inch of every rap record ever made’

Despite his huge record collection, DJ Shadow has moved away from sampled sounds 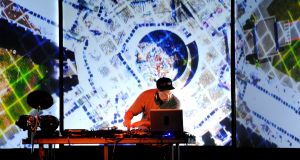 DJ Shadow will open the Metropolis Festival at the RDS on November 3. Photograph: Shirlaine Forrest/WireImage 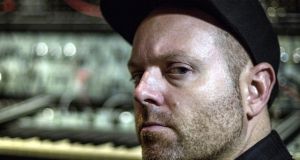 It all started at a Tower of Power concert in 1972, when an embryonic Joshua Davis, later to be known as DJ Shadow, had his first reaction to music.

Two weeks overdue, and fed up of remaining housebound, Davis’s pregnant mother decided to attend the show and felt the kicks of appreciation against her stomach.

Davis went on to become something of a legend, not only within hip-hop circles but to the majority of those attuned with moving tides of the modern musical landscape.

A lot of this recognition is down to Davis’ debut Endtroducing, an album which still remains his magnum opus, 20 years on.

Released in 1996 – when he was just 24 – on the UK label Mo’ Wax, the record was named the first album ever to have been built entirely from samples by the Guinness Book of World Records.

The seamlessness with which Davis manages to weave a cacophony of sounds into one stellar track after another has made it the timeless classic it is today.

This year marks the 20th anniversary of Endtroducing, as well as the timely release of his fifth album, The Mountain Will Fall.

His latest effort signals a definitive turning point in DJ Shadow’s music, which has been building for a while, away from sampling and towards live instrumentation and original production, but more on that later.

Let’s turn back the clock for a minute.

In the early 1970s, when DJ Shadow was just a kid in San Francisco, he would sit in the back of his parents’ car absorbing a wide-ranging plethora of music they were listening to.

“My dad was all over the shop as far as his musical tastes. I remember going through his cassettes when I was seven or eight and it was everything from fiddle music, from people like Asleep at the Wheel to Doug Kershaw, to blues with people like Little Milton and Albert King, to stuff like Lou Reed.”

On the other end of the spectrum, his mother veered towards the more “socially conscious” sounds such as those of Curtis Mayfield and Joan Baez.

Davis maintains that what his parents were listening to didn’t have an effect on his own tastes.

“I grew up not caring for their music because it wasn’t my music. I started listening to r’n’b on the radio in the 1970s and 1980s because I didn’t relate to the excess and pomp of rock’n’roll in that era.”

Davis was beginning middle school just as, what would become, his lifelong affair with hip-hop was beginning. The vast majority of his classmates wrote the genre off as a fad, but he and two comrades stuck by it.

“I was trying to grasp on to the clues of what hip-hop was beyond the fad.”

While he may not share his parents’ musical tastes, this urge to challenge himself musically, both as a listener and a creator, stems from his mother. “That was something my mother taught me: how to look beyond the mainstream.”

It is this passion for plundering the depths of music’s capabilities that has led Davis to amass a colossal record collection. QuestLove made an estimate of 60,000 in an interview with NPR but Davis reckons there’s much, much more than that.

So, how does someone with so many records distinguish between what’s worth purchasing and what isn’t?

“There’s three reasons I buy records. As a DJ, as a producer and the third as a music lover and a collector. I consider myself a hip hop completist so I attempt to purchase a 12-inch of every rap or hip-hop record ever made.”

This is despite Davis saying, rather pragmatically and without the nostalgia one might expect of someone so steeped in the scene, that the record store isn’t what it used to be.

“I wish I could say that I felt it still had that community vibe. There are certain large record stores here in California where, when I used to go in, it felt vibrant, it felt like there was something happening and now it just feels like a morgue.”

Curation and a passion behind the counter are key elements that many stores are missing today, says Davis. But, at the end of the day, music remains the most important thing regardless of how it is discovered.

“I don’t find myself to be over romantic about record stores, about this point anymore. The bottom line for me is I just want the music with minimal bullshit. If that means I get it by download, so be it.”

Davis, something of a futurist, merely sees the advent of the digital format as a new medium for people to be creative on.

“It’s not one I can afford to ignore as a music lover since most new music is coming out digitally now.”

Sampling laws are another of element of the industry that has changed drastically since DJ Shadow first began back in 1984.

The laws have clamped down and it is increasingly difficult to get permission to use samples without paying steep royalties. He cites it as a reason for his move away from samples, but not the sole one.

“What happened is, more than anything over the last couple of albums, I found myself pushing sampling in. What I always wanted to do was blur the lines with sampling and feeling live, so it almost felt like a non-conversation.

“When those songs didn’t get any kind of recognition, I kind of started to realise that I don’t think it really matters any more.”

Parallel to this realisation came the understanding that the way modern production software works, everything is essentially a sample.

“When you’re scrolling through your folder of kick drums looking for a kick, to me it doesn’t really matter if it came from a record or a live session or a drum machine; a kick is a kick. It’s all about what sounds best in the mix. It can come from a studio, software or a record.

“Once you make that step in your mind, that ‘I’m not going to limit myself to one sonic realm just to hold a flag’, that allowed my songwriting to open up and the songs to expand.”

Hence his latest endeavour, The Mountains Will Fall, denotes a new direction in DJ Shadow’s work.

Created using predominantly Ableton software and live instruments, the album is (technically speaking) his most original work to date. He hopes people won’t compare it to Endtroducing.

“Most artists would hope that you keep each work as its own moment – based on its own merits rather than what came prior.”

He has made his peace with the revolutionary status his first album holds.

He could have made another Endtroducing if he wanted to, but Davis is not in the business of making art on other people’s terms.

“Music is a lifelong pursuit. Nothing frustrates me more about my peers or the people I love is when they go ‘Okay, I’m tired of fighting it, I’m just gonna phone it in and make the music other people want me to make’. That’s the moment I say, ‘Okay, it’s been nice knowing you’ .”

“For better or for worse, that’s not where I want to be. I want to continue making an effort.”

Live Aid: the day Bob Geldof dropped the F-word. But what did he say exactly?